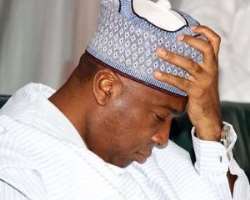 Senate President  Bukola Saraki may be fighting the fight of his life as  a witness has made what appeared to be damning revelations against him at Code Conduct Tribunal on Wednesday..

Micheal Wetkas, the first prosecution witness in the false asset declaration trial of the Senate President,  revealed  that  Saraki continued to earn salary monthly as governor of Kwara state for four years after he left office .

Wetkas  at the continuation of Saraki’s trial at CCT, said in the course of the EFCC investigation, “we wrote to Access Bank for them to give us details of the salary account of the defendant. The salary that was coming into the account was N254, 212 as of 1 August 2007.

“On October 16, 2006, the defendant obtained a loan of N380 million from GTB. On that same day, there was a bank draft in favour of the same implementation committee.

“The draft was N286.3 million. On the same day, there was another draft of N12.8 million in favour of the committee on the landed properties. The loans were meant for purchase of properties by the defendant.

“On April 30, 2009, there was a bank draft of in favour of PGL Asset Management Limited in the sum of N400m. On October 26, 2009, cash lodgments were made by different individuals to Zenith bank account of the defendant 87 times in a single day.

Meanwhile, the Kwara State government has rebutted the witness’claims  that former governor of the state, Dr Abubakar Bukola Saraki, salary after he left office in May 2011.

The SSG explained that from June 2011, Saraki started receiving his pension which was N578,188.00 as other past governors in the country.

He explained further in his  statement that after the review of pensions of former political office holders by the State Pension Board, the former governor's pension increased to N1,239,493.94 monthly from October 2014 to date.

“Kwara State Government, therefore, dismissed as false and misleading the allegation that former Governor Saraki was receiving salaries after the expiration of his two-term tenure as governor of the state.”

Wetkas had also revealed how Saraki operated three bank accounts and how transactions on those accounts were carried out.

Wetkas who explained that Saraki operated a naira account, dollar account and pounds account revealed how transactions were made in favour of a Presidential Implementation Committee and for acquisition of properties amongst other things.

Giving evidence at the CCT, Wetkas also revealed the people who carried out those transactions on behalf of Saraki.

Below are the dealings according to the witness:
Exhibit P7: Naira Account
Naira currency account which the defendant is sole signatory to. The first date of transaction on the account was 23, March, 2005 when there was cash lodgement of N10 million by one Abdul who was discovered to be PA of the defendant.

On 29 March, there was a transaction of N200,240m in favour of the Presidential Implementation Committee on Sale of Govt Properties. It was a draft for the purchase of property from the Implementation. Also, on 29, there was a loan disbursement of N200 million which preceded the bank draft.

On 16, Oct 2006, there was a disbursement of a loan of N380 million and the same day, there were 2 bank drafts in favour of the Implementation Committee combined in one transaction for the sum of N256, 312,815million- the total sum of the two drafts.

On 16, October, 2006, there was another draft of N12.8 million also on favour of the Implementation Committee. Wetkas said the drafts are meant for purchase of property from the implementation Commitee by the defendants. On 5, February, 2007, there was a loan disbursement by GTB into the account of the sum of N380 million.

How the Account was funded /Repayment of Loan
On 27, Feb 2007, there was a cash deposit by Josiah Samuel of N3 million. Then on 3 Apri, 2007, there was telegraphic transfer of N180, 625m. It was done on the instruction of the defendant as part payment for another property from the Implementation Committee.

Before the lodgement, the account was in debit balance of over N80 million. On 29 Nov, there was also cash lodgements by Ubi in over 20 transactions and the total sum is about N20 million. On 4 March, 2008, there was cash lodgment by different individuals before then, the account was in deficit of over N96m. On I8, April, 2008, cash lodgements by several individuals with different names.

On 23, Sept. 2008, there were several cash lodgments also by different individuals. On 30 April, 2009, there was a draft in favour BGL Assets Management Limited of the sum of N400 million. There were several cash lodgments by different individuals on that same day. There was a lodgment of N65 million on that day after which there a loan of disbursement of N400 million.

On 26, October 2009, there were cash lodgments by different individuals-87 lodgments in all. The money was deposited to defray the loans because the account was in debit balance.

He said his team demanded for the deposit slips from GTB and raised issues with the bank because there were no details of individuals who pay in the money.

On 5 November 2009, there was also cash lodgements by several individuals.

Part of the outflows were to BDCs. From our investigations, the transfers from this account to American Express Services Europe Ltd account was up 3,400 m dollars. Part of the outflow also is to the Pound Sterling Account.

The foreign currencies were transferred to American Services Euro Ltd acct no 730580 and the beneficiary banks according to telex for transfer are American Express Bank, New York. One of the telex, used for a transaction on 25, Aug 2008 for the sum of 73,223.28 dollars was tendered.

The inflows were from the dollar account. Loan of N375million by GTB to the defendant on 10 Feb 2010, the purpose was for the purchase of property in London.

The money was transferred to the dollars account and was later transferred to Fortis Bank SA/NV for mortgage redemption. The beneficiary of the transfer is Dr. B Saraki.

Wetkas identified the petition sent to the EFCC by Kwara Freedom Network in which the group asked EFCC to investigate management of Kwara State account form 2003 to 2007. There were four petitions from the same organisation. Another petition is from the Concerned Pensioners of Nigeria, Kwara State branch.