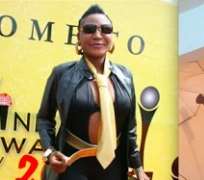 All does not seems to be well with some celebs in the Yoruba movie industry especially for Kemi Afolabi and controversial singer and actress, Seyi Ariyo better known as She Baby.

The news of the two celebs started some weeks back when Kemi Afolabi borrowed clothes from She Baby to play a movie role and then refursed to return the clothes to the owner which led to She Baby updating her social media status with “Kemi Afolabi, you are coward! Pic up snitch! Oloriburuku, you are a disgrace to Nollywood! Please return my clothes; your case is so pitiful. Get a life!”

This arouse attention from fans and top Yoruba actors like Saidi Balogun who stepped into the matter but She Baby has now disclosed that she will never wear those clothes again after Saidi had helped her collect the clothes.

She Baby giving her own side of the story that Kemi was late for a role she was suppose to play and after much convincing by the director, she decided to lend her clothes to her and since she was late, her role ran through the night which led to her lodging in an hotel and then asking her to pay which was not part of the contract.

According to her, “I had a movie shoot recently, and Kemi Afolabi happened to be one of the actors I used. She ought to come 10 am, but she got to the location 5 pm. She had just three scenes with us, and I paid her fully already for her role. I was angry she already disrupted part of what we intended using her for because she didn't come as scheduled. But was persuaded by my director to change her role which she finished around 10 pm.

According to She Baby, “I lent her my clothes in the course of shooting. She now held on to the clothes as a bait, insisting I must pay for her accommodation which wasn't in our budget. If she had come earlier as agreed, she would have been released in time because it's just three scenes.

“Kemi now held on to my clothes for two about months. All efforts to get her on phone proved abortive. She wouldn't reply all my messages neither would she pick my calls. After what seems like eternity, because we ain't that close,I was feeling uncomfortable leaving the clothes with her. I decided to call her friend,Sikiratu Sindodo and reported Kemi to her. And Sindodo persuaded me that it will be settled.

“Until I called Kemi, and she yelled at me. She was angry that I reported her. She now insisted she won't give me the clothes until I pay for the said hotel room which wasn't in our contract. All further efforts to get the clothes proved difficult, and I was angry. I later wrote on my PM about the clothes and Saidi Balogun intervened. And I pulled it down immediately. Later,Saidi went to get the clothes from her. But the truth of the matter is that I can't put the clothes on again. That's all. And she went on her Instagram page, writing all sorts of things to attract public pity. Kemi Afolabi is a blatant liar”.