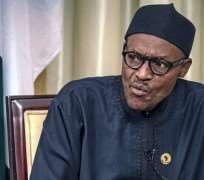 Nigeria has indicted over 300 companies and prominent individuals, including serving and retired military officers, for defrauding the country of millions of dollars in fake contracts, the presidency said Thursday.

The contracts are linked to former national security adviser Sambo Dasuki, who served under former president Goodluck Jonathan from June 2012 until his sacking in July last year by current president Muhammadu Buhari.

Buhari took office last May and has since launched a crackdown on endemic graft with some high-profile arrests made over the fictitious arms contracts to fight Boko Haram worth some $2 billion and also linked to the former spy master.

A separate committee was set up to investigate other deals awarded by Dasuki, 60, between 2011 and 2015.

“Over seven billion naira ($5 million) has been recovered so far from the indicted companies and individuals,” the presidency said in a statement, adding that another 41 billion naira is due to be paid back soon.

“The committee further established that one of the indicted companies, Societe D’Equipment International was overpaid to the tune of 7.9 million euros and $7.09 million,” it said.

The statement said that contracts were awarded under Dasuki “without any contractual agreement or evidence of jobs executed”.

“The committee further discovered that some companies failed to meet up their tax obligations for contracts executed,” it added.

Dasuki is already facing charges for the possession of illegal weapons, as well as allegedly diverting millions of dollars meant for security to the then-ruling Peoples Democratic Party to finance Jonathan’s bid for re-election.