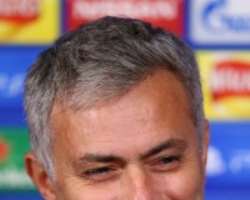 Jose Mourinho has his next job worked out — although the whereabouts of that job remains a subject of conjecture.

BT Sport journalist Matt Smith revealed on Twitter on Thursday night that Mourinho had told him in an interview that he would be joining his next club “in July.”

Mourinho did not make the assertion on camera, though Smith confirmed that the 54-year-old's agent, Jorge Mendes, was present when he spoke.