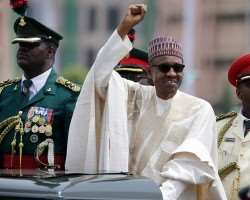 President Muhammadu Buhari has disowned the a key social security policy of his party, which promised to pay a monthly stipend of N5000 to unemployed.

The President ruled out the possibility of his government paying N5,000 monthly allowance to unemployed youths in the country as promised by his party.

The payment of this stipend to the youths of the country is one of the prominent promises of the ruling All Prgoressives Congresss in the run up to the 2015 elections.

Incidentally,  a provision has been made for the implementation of the programme in the budget, with key officials of the administration, including Vice President Yemi Osinbajo and Minister of Information, Lai Mohammed severally discussing how the policy would pan out after the budget is approved.

President Buhari, who returned from on a one-week official visit to Saudi Arabia and Qatar on Monday however made it clear in Saudi Arabia during an interactive session that he could not be paying those who do not work.

He said he has a “slightly different priority” from the position of his party on the payment of the unemployed which he described as a “largesse.”

The president’s position is seen by pundits as his first major break away from the ideological bent of the Action Congress arm of the party, which with is neo-liberal inclination has been the main force behind the policy.

According to the president, His administration would rather rather than  build infrastructure and empower able-bodied men to work rather commit such resources to the payment of the jobless.

He said, “This largesse: N5,000 for the unemployed, I have got a slightly different priority.

“I would rather do the infrastructure, the school and correct them and empower agriculture, mining so that every able-bodied person can go and get work instead of giving N5,000 to those who don't work.”

The APC, which defeated the then ruling Peoples Democratic Party in the March 28 presidential election, had promised during its campaign that if elected to the central government, it would pay N5,000 monthly to 25 million jobless youths as well as introduce a free school feeding programme.

APC is expected to officially react to this volte-face, but Nigerians have reacted differently to the development.

Governors Rochas Okorocha of Imo State and Tanko Almakura of Nasarawa State saw the reversal as a consequence of economic realities of the time, eventhough the president did not give that as his reason for reneging on the promise by his party.

But memebers of the opposition Peoples Democratic Party, such as erstwhile deputy Speaker of the House of Representatives, Sir Austin Opara, describe it simply as another betrayal by the APC.

Okorocha , true type, made light of the development, saying that implementing the policy  might lead the unemployed to marrying a harem of women as wives and increased intake of alcoholic drinks.

He was quoted to have said, “To be honest with you, it is a great idea, but there are many ways to give that support. Sometimes it could be in cash which has its negative challenges. Handling of that is also in itself a wonderful and great idea.

But for  Governor Al-Makura, it behoves on the president to review policies.

He said, “The President is the person that can tell you precisely how he is working on promises and interventions that he has created by his ingenuity. And if at any point in time the President is reviewing that issue, I think he is the only person to do that because what he is doing is in the best interest of the country.”

But former deputy Speaker of the House of Representatives, Austin Opara said it was very unfortunate that the APC hoodwinked Nigerians with a negative change which could not materialize. According to him, “It is very unfortunate that Nigerian politicians won't keep to the promises they made during electioneering campaigns and coming from the President of the Federal Republic of Nigeria is not only disappointing but very disgraceful”.