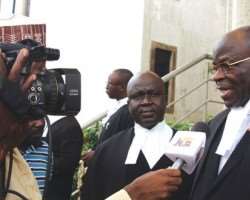 The anticipated court hearing on the case of unlawful arrest brought by Rickey Tarfa, SAN, against the Economic and Financial Crimes Commission, EFCC, and three others persons which was billed for today suffered a setback because the applicant attempted to introduce new evidence.

Tarfa had approach the Federal High Court, Lagos asking the court to award N2.5 billion as damages against the EFCC over his arrest and detention, the case at first hearing was adjourned to be heard today, February 29, 2016 by Justice Mohammed Idris.

Tarfa had in an affidavit by one John Olusegun Odubela, who is the head of Chambers in the firm of Messrs Rickey Tarfa & Co, admitted that the applicant gave the sum of Two Hundred and Twenty Five Thousand Naira Only (N225,000) to Justice M.N Yunusa of the Federal High Court.

He has now approached the court for an order granting him leave to re-open and adduce further evidence that the said Justice M. N. Yunusa is Mr. Mohammed Awwal Yunusa, a former employee in Tarfa's chambers, as the beneficiary of the N225, 000.

Tarfa, SAN, had stated in his earlier affidavit ''That it was a common knowledge in legal circles that the Honourable Justice M.N Yunusa lost his father in-law Alhaji Audi Garba Damasa on 28th December 2013 in Maiduguri and travelled there to attend to the funeral rites.

“That the applicant and some friends of the Honourable Justice M.N Yunusa made some donations towards the said funeral rites and to commiserate with the Judge since they could not physically go and commiserate with him in Maiduguri where he was and stayed for a while.

“That the contributed monies amounted to Two Hundred and Twenty Five Thousand (N225,000) which sum was given to the applicant with the responsibility to get same across to the bereaved judge.

“That the applicant consequently made arrangements to forward the sum of N225,000.

“That I know as a fact that it is common in Nigeria for friends and well-wishers to contribute gifts in cash and kind to people who are celebrating or bereaved”.

Tarfa has now made a u-turn. “That the Applicant did not in paragraphs 35, 36, 37, 38, & 39 of the Applicant's further affidavit deposed to on 19th February, 2016 stated that the sum of N225,000 was paid to Honourable Justice M. N. Yunusa of this Honourable Court.”… “That the sum of N225,000 was paid to the Applicant's former staff, M. A. Yunusa Esq and it is necessary to adduce further evidence by allowing the use of further and better affidavit of Mr. Mohammed Awwal Yunusa in support of the application for enforcement of fundamental rights who owns the account that was said to have been owned by Honourable Justice M. N. Yunusa”,

Shittu claims that the applicant's new position that this was not what he said is a gross misrepresentation and an attempt to mislead the court. Shittu also drew the court attention to the fact that Tarfa repeatedly wrote that he was 43 years in all the pages of his extra-judicial statement with the EFCC whereas A Compendium 3rd Edition of Senior Advocates of Nigeria shows that Tarfa was born on February 23, 1962 making him 54 years.

After listening to the arguments of the two parties Justice Idris adjourned the matter to March 2, 2016

for ruling on the new application.
-Emmanuel Ikechukwu