See How Oge Okoye Exposed Herself in Public 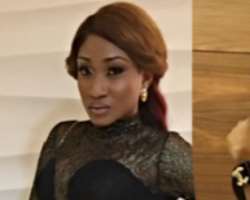 Nollywod actress, Oge Okoye, is really enjoying herself as a single mother and she is not bothered since she does not have to answer anybody at home neither does she have to rush home to cook for any man.

The actress was recently with her best friend Ebube Nwagbo, to celebrate her birthday which was rather done on a low key. But Oge has gotten many talking as some of her fans were surprised to see the kind of outfit she wore being a mother.

Oge's outfit from the top looks adorable but when seen in full, one is bound to see a mother dressed in high slit outfit which almost exposed her underneath.