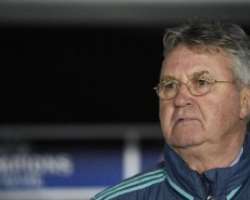 Guus Hiddink will attempt to maintain Chelsea ‘s improved form at Southampton on Saturday after a week in which Antonio Conte appeared to move close to becoming the Dutchman’s successor at Stamford Bridge.

Chelsea remain unbeaten in domestic competition since Hiddink was installed as interim manager in December, a 12-game run that has taken the Blues into the FA Cup quarter-finals and helped the club move closer to mid-table in the Premier League.

Hiddink has brought much needed stability, with the only blemish on his record the last 16 first leg Champions League defeat at Paris Saint Germain which he hopes to avenge next month.

The 69-year-old’s second temporary spell at the club was always destined to draw to a close at the end of the season and reports this week suggest Italy coach Conte, whose current contract expires after Euro 2016, has emerged as the front-runner to take charge next season.

Whether or not Conte takes over a club on the up hinges on Hiddink continuing to bring the best out of a group of players who have recently started to show the form they demonstrated in winning the title last year.

Southampton manager Ronald Koeman, who played under Hiddink at PSV Eindhoven , believes his former manager was the ideal appointment after the departure of Jose Mourinho.

“He is always defending his players and that was good for Chelsea at that moment,” Koeman said.

“He was the right man at the right moment and the players are looking more comfortable and he has given them confidence. Southampton’s manager Ronald Koeman, pictured on February 6, 2016, admits he has yet to discuss  …

“I was expecting that because they have good players with good qualities. The way the manager is dealing with the team is good for this moment.

“When they changed the manager they signed Guus Hiddink for his second spell at Chelsea and he had, in the past, had a good relationship with the players.

“He is a coach with a lot of experience at all levels and knows a lot. He has a knowledge about characters of players and how to give them that important support.”

– Written off –
Hiddink admits his priorities lie with the FA Cup and Champions League, having effectively written off Chelsea’s hopes of challenging for a place in Europe via their league position.

Their form has effectively ended any fears they may get drawn into a relegation fight, although they remain in 12th place, nine points clear of the bottom three, underlining the need to maintain recent progress.

Southampton’s standing is much healthier, with Koeman’s side now sixth after a run of five wins and draw that revived their campaign after a disastrous December.

The target is to secure a return to the Europa League but, regardless of how the season ends, Koeman admits he has yet to discuss his future with the club’s board.

“I’m still in my second season, it’s too early to make conclusions or to talk about the future,” Koeman said.

“Let me first finish this season and try and continue what we are doing until now. I don’t like to talk about my future because it’s not the most important thing at the moment.”

Hazard was named the double Footballer of the Year last season, but the Belgium midfielder had struggled to recapture that form this term before showing signs of improvement in the recent FA Cup wins over Milton Keynes Dons and Manchester City .

“Playing like this, Eden is like a new signing for us. Eden is a big player and we need him,” Azpilicueta told the Evening Standard.

“We are a much stronger squad if we have Eden playing at his best and have a better chance to get good results.

“It is better to have Eden in his best form now than at the start of the season.”