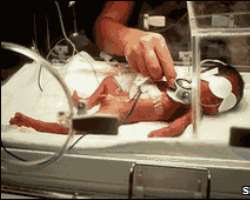 Babies born before 24 weeks are spending longer periods in intensive care but their overall survival rates have not improved, a study has found.

Newcastle doctors say while more babies over 24 weeks do now live, the longer-term rates for infants just a week younger are static.

About 20% of such babies survive, but those who do usually have disabilities.

The study, published in Archives of Disease in Childhood, looked at 230 babies born at 22 and 23 weeks.

Over the course of 15 years, the length and intensity of treatment appeared to increase: the average survival time of those babies who ultimately died rose from 11 hours in 1993 to nearly four days by 2007.

But despite more active intervention being documented in the last five years of the study, in which 60% of the babies born were actively resuscitated, the longer-term survival rates did not appear to increase.

Open discussion
The findings are in keeping with those of the major Epicure study, which showed that while survival rates for babies born at 24 and 25 weeks have improved over the last ten years those for younger infants have not, as their organs are simply not sufficiently developed.

If we can give parents an individualised chance of survival, we really would be getting somewhere

Professor John Wyatt
University College London
Guidelines have been drawn up which recommend no resuscitation be carried out at 22 weeks, and only at the parents' request at 23 weeks following a full discussion about the possible outcomes.

“We know anecdotally that more parents are asking for resuscitation and more doctors are offering it. We are not making a value judgement about this, and for many this may be the right thing to do – even if it only brings an extra three days of life,” says Dr Nicholas Embleton, a neonatologist at Newcastle's Royal Victoria Infirmary, who led the research.

“Cost should not be an issue when making these decisions, but we do need to think about what these babies may go through, the increasing interventions, in the hope that they may survive.”

Bliss chief executive Andy Cole said: “This is an interesting piece of research and its findings echo those of the national Epicure study.

“The number of babies born at 22 or 23 weeks gestation accounts for an extremely small percentage of all births. However it is always important that these babies' treatment and care options are considered on an individual basis.”

Weeks fixation
Discussion about the survival rates of the most premature babies also takes place against the backdrop of the debate about abortion. There have been attempts to reduce the current 24 week limit for terminations to 22 weeks on the grounds of viability.

“It is really because of the abortion debate that we have got so fixated by weeks when it comes to premature babies, and the shame about this study is that it didn't move beyond that,” says John Wyatt, professor of Ethics & Perinatology at University College London.

“What we really need to start looking at is weight, sex, whether it is singleton pregnancy and whether steroids have been given. A girl is much more likely to survive than a boy, for instance, and the heavier the better.

“If we can give parents an individualised chance of survival, we really would be getting somewhere.”