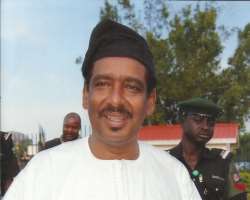 With the increasing rate of Kidnapping, armed robbery and car snatching cases in Nigeria especially in North East, the Public relation officer of Alliance For Democratic Freedom Mr Alex Nwankwo has called on President Mohammed Buhari to engage the services of famous crime Fighter Dr. Alhaji Ali Kwara in curbing this unpleasant situation.

Speaking recently at a media seminar held in Anambra‎, the popular Social media reporter said that to complement the anti- corruption war that the administration is fighting, the likes of Ali Kwara who has cracked down high profile criminals in northern parts of the country and beyond should be empowered and supported to flush out these miscreants.

Ali Kwara and the anti-robbery squad‎ attached to him have been night-mare to robbers over the years, has worked with several northern state and Federal governments especially during era of Obasanjo and Yardua. It is obvious that President Buhari is aware of the capability of the crime-hunter as he was quoted during the Jonathan reign on international media that the PDP led government were not serious curbing crime and failed to identify the efforts of Kwara in fighting crime.

It could recalled that there was a time during Yardua administration ‎that the Capital city -Abuja and some northern states were bedeviled of car snatching syndicates, Bank robbery nd armed banditry, though the regime did a lot to fight crime but had short time in power. Their activities were nightmare to residents until Ali Kwara was brought in by Yardua government to salvage the situation.

Mr. Nwankwo who is also popularly known as Alexreports ‎stressed on the urgency of Buhari's administration and the Nigerian Police force to collaborate with Kwara in fighting crime as many Nigerian know his success stories in cracking down notorious and wanted criminals in past.