Nigeria: From Cluelessness To Callousness 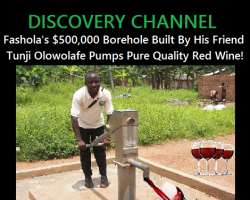 History repeats itself and the more things change, the more they stay the same. Nigeria just pulled itself out of a never seeming ending reign of clueless governance and without much break, landed right into another harrowing reign, this time of what can best be described as callous governance.

Nigeria's new President Muhammadu Buhari thankfully is not clueless, but what he lacks in cluelessness, he insists on replacing with callousness. Former military dictator Muhammadu Buhari, now in Agbada-civilian attire is rash to a fault. He just made headlines describing his citizens as unwanted abroad due to their criminality. "Some Nigerians complain about the country, but they have also made it difficult for Europeans and Americans to accept them because of the number of Nigerians in prisons (criminals) all over the world," he said. What a pitch for a nation of disenfranchised citizens desperate for upgrade. President Buhari was talking to caucasian reporters from the colonial-UK Telegraph . Twitter exploded! Hashtag #IAmANigerianNotACriminal.

Nigerians have gotten used to the disdainful President giving important updates about the state of the nation first to foreign journalists before, if ever, telling his "worthless" countrymen what the real situation and plans are, but to now be insulted abroad was a new low.

Sadly, this was rather not unexpected. Nigerians knew what to expect from President Muhammadu Buhari, but had no choice as they needed to desperately kick-out former President Goodluck Ebele Jonathan, the deadly clueless kleptocratic one. Perhaps for some Nigerians, there was a hope that Buhari after waiting for 30 years to return to power, might have changed and repented on his brutal and seemingly callous ways. Persons like Nobel laureate Wole Soyinka refused to make that gambit. Buhari had never publicly repented his Idi-Amin-ical unconscientiousness in his 80s rule. A rule marred with administrative crimes like retroactive executions .

History just repeated itself. The first 8-months of the new Buhari regime has been a repeat of the very things Fela Kuti sang about. While as then, the government has taken admirable steps to curb corruption and defeat terrorism, suspects have been jailed and detained in open flaunting of court orders with some (like Zakzaky) held for months, denied family or legal visitation. The government once again massacred students in Zaria, with as many as 1000 mostly youth and students killed in a widely condemned extra-judicial, maniacal, over-handed military and State government "honour killing" reaction to protests in Zaria. Buhari voiced his approval, stating during a media chat, that had he not been "sitting-duck" as a civilian leader, they would have gotten worse treatment for "disrespecting soldiers."

And while the government has in its cabinet, several corrupt persons including former governors who convert State government websites built with as much as $350,000 State funds into their personal property and drill $400 boreholes for as much as $500,000 a piece–a world record-the President disses many hardworking, loved Nigerians abroad who are victims of years of malgovernance by many of his friends-like late dictator Sani Abacha-who he has in the past defended of not being corrupt, in spite of evidence of their looting billions of dollars now being repatriated to the country.

Add to that many recent deadly untruths about the true state of the war on terror and obtuse denials of corrupt and impeachable budget gymnastics, you get a holier-than-though administration that is callous to a fault.

Hard-working, respected economic-migrant Nigerians abroad have repatriated billions of dollars that has sustained millions of lives and businesses in Nigeria while friends of the President's, like Abacha robbed the nation dry and stalled the nation's development. And how about spending foreign interview time discussing things late M.K.O. Abiola would, like reparations for Africa?

This is Nigeria's new predicament. But we are yet hopeful.