I Don’t Worry About Men, They Are Mere Resource- Seyi Law 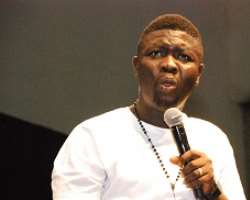 Popular Comedian Seyi law is one of Nigeria's top comedians. He owns an outfit of his own named Black Advoc8 international limited.

The comic entertainer who started his career after he won the first edition of 'open mic' competition organized by Ayo Makun in year 2006, has recently hit back on his haters with a recent post.

The comedian stated that despite to small fan base he has, there is nothing earning him success but just simple belief and humility to God.

According to him, ''people wonder why and how I stay relevant. They are amazed at what I say; they are shocked at how small my circle is. They can't decipher how I pull off mighty things. They question their own logical reasoning. They keep probing hard at already answered questions. They just can't find the secret, yes those around me might be few in numbers, but I have a God who is more than numbers. I stay connected to God who is the source, and worry less about men who are mere resources. Now you know, Seyi Law.''