I intended to compensate my boss with 3 cars– Car thief 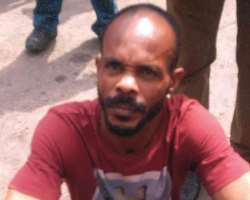 Edo State born George Orheware, a professional driver, looked so helpless and hopeless last week, sitting on the floor at the Lagos State Police Command headquarters, where members of the Special Anti-Robbery Squad had paraded some suspected criminals.

Orheware, nabbed for car theft crime, confessed to stealing his female boss' Toyota Sienna just after three weeks of working for her.

While speaking to Saturday PUNCH, Orheware said it was his brother who is currently in prison, that lured him into the crime.

'My brother has been in jail for more than four years. I have been communicating with him before this incident. He begged me to assist him. He had been granted bail of N250,000 and he wanted me to help raise the money. I didn't have that kind of money and I had just started work as a driver three weeks before I was caught. My brother suggested I steal my madam's car. He told me he knew somebody who would help me to dispose of the car since I had not done it before.'

Talking about how he managed to get the car out of the house, he said, 'I would always wash the car and warm its engine every morning as I get to work. That morning, the househelp gave me the car keys to clean the car and warm the engine as usual. After that, I told him I was going down the road to see my girlfriend. He didn't doubt me. That was how I took off with the car. My madam lives at Opebi (Lagos). The boy who my brother said would assist me was already at my boss' house, so we took off together and I drove to Sango (Ogun State). As we got to Sango, he took over the driving and we went to Benin Republic from there,' he said.

The suspect said he was told he would be paid N800, 000 for the car but he got nothing even as he handed the car over to the people his brother suggested to him.

'They were just dribbling me when we got to Benin. I had spent four days there. I was just helpless. I lost everything. Nobody gave me a dime. They even told me I should leave Benin Republic immediately so as not to bring problem for them. I had no choice but to head back to Lagos.

'I went to my sister's place when I came back and she raised the alarm when she saw me and people caught me and handed me over to the police. The police had earlier arrested her for my 'sins'.'

Asked if his boss was mean to him while working for her for him to steal her car, Orheware said, 'She was never mean to me. She fed me in the morning and she would also give me money to go home. I am ashamed of what I have done. I feel like dying. I will only beg God to forgive me. This is my first crime and it will be my last.

'I wouldn't know how it happened. It was as if I was bewitched. I don't know how I managed to fall into this crime. This is not my lifestyle. We lost our mother in 1987. I had intended using part of the money to travel outside the country and then send three cars to my madam to make up for her car that I stole. I had intention of replacing the car,' he said.

Son of a chief security officer to a vice chancellor in a Nigerian university, Orheware said his father would likely disown him.

'I have brought shame to him and my family members. I did not even gain anything. My father is a retired policeman. It is very unfortunate. I know I will never do this again. I am so ashamed of myself,' he said. – Punch.