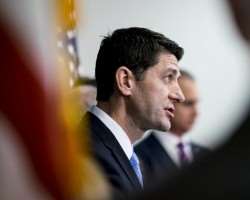 Speaker of the House Paul Ryan talks to reporters following the weekly House GOP Conference meeting at the U.S. Capitol on Jan. 12, 2016 in Washington, D.C.

During his State of the Union address last night, President Obama seemed eager to tout the nation's economic gains. “The United States of America, right now, has the strongest, most durable economy in the world,” he said , before rattling off key statistics, including rapid job growth and the strength of the American auto industry.

“Anyone claiming that America's economy is in decline is peddling fiction,” the president added.

The problem for Republicans, of course, is that Obama's rhetoric is true. GOP officials have spent seven years insisting that the White House's agenda – the Affordable Care Act, higher taxes on the wealthy, Wall Street regulations, environmental safeguards, et al – would produce an economic disaster, but none of those predictions have come to fruition.

It leads to a rather obvious question: are Republicans prepared to give the president some credit for the improved economy and for rescuing the country from the Great Recession? The nation's top GOP official confronted the issue yesterday.

Instead of crediting Obama for any of the economic gains that have occurred in the last seven years, Ryan argued that the Federal Reserve's policies pushed the recovery.

According to the transcript, via Nexis, a reporter asked Ryan if he believes the president “deserves any credit at all” for economic improvements. The Republican Speaker responded, “I think the Federal Reserve has done more. And by the way, I think the Federal Reserve has given us, in combination with Obama policies, more regulations, higher taxes, more uncertainty; has given us trickle-down economics.”

I realize that much of the Beltway political establishment considers Paul Ryan some kind of numbers-wiz policy wonk, but his answer yesterday was a reminder that the Wisconsin congressman really doesn't know what he's talking about.

We can just skip over the fact that, if a President Romney had cut the unemployment rate from 10% to 5%, Ryan would be organizing parades in his honor. That's not important.

What is important is that Ryan's explanation is gibberish. Consider the Speaker's argument broken down into its component parts:

2. Paul Ryan believes the Fed's recent monetary policies are bad for the economy.

About a year ago, Paul Krugman described Ryan's understanding of monetary policy as “ craziness .” The assessment continues to be fair.

As for the GOP leader's complaints about “trickle-down economics,” this really is through-the-looking-glass rhetoric, even by 2016 standards. We're talking about a lawmaker whose claim to fame is a budget plan that rewards the very wealthy with massive tax breaks – while slashing domestic spending – in the hopes that prosperity will eventually reach everyone once the rich has even more money in their pockets.