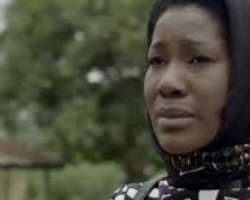 What a sad way to kick-start a New Year! Nollywood actress, Stephanie Okereke-Linus who put to bed few months back has just lost her father.

The A-list actress who has been in America for the past five months lost her Dad a few days ago.

It was gathered that the 83-year old Chief Okereke took some medications and reacted badly.

Shortly after that, he passed on leaving behind his wife,children and grand children.

Due to the death, the bereaved actress will soon return to Nigeria with her hubby and son Maxwell to give their late father a befitting burial.