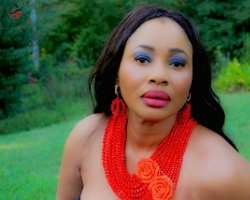 Veteran Nollywood actress, Clarion Chukwura, seems to have been absent from social gathering for a while but the actress is quietly enjoying her life.

The actress is currently in the city of Jos, having a nice time while wishing and praying for her son, Clarence Peter's success.

Clarion revealed that she celebrated her new in Jos as she hopes the New Year's blessings will flow round in many homes.

Being in such a religious state where they so much like covering their body due to their strong Islamic practice, the actress was seen dressed in a top that revealed part of her belly with a black jean and pair of sneakers.