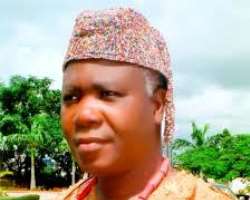 Findings at the commission revealed number of vexed issues ranging from flamboyant life style of the Managing Director, Itsekiri Nation agitation over short-changing and partiality in employment; to double dealing in the payment of youths empowerment funds to the various ethnic nationalities that constitutes DESOPADEC territories.

Next is the invisible hands of some aggrieved PDP chieftains who lobbied extensively for the commission's top job but crashed along the way after Chief Onanefe James Ibori anointed MAKINDE thereby frustrating Gov Okowa's group choice of candidate for the position.

These invisible hands working with the Okowa aggrieved cacaus swore to make DESOPADEC another war zone so as to frustrate the present Managing Director to resign his appointment as the heat multiplies to give room for re-shuffling of personnel at the commission.

Gov Okowa is said to be hell bent on pulling down Chief Makinde, using his media hit man, Mr Samson Oghenedoro Tega aka Fejiro Oliver. This media bulldog is well known for uncommon blackmail and pen rascality. It is therefore not a surprise that Okowa choose to recruit him for the job.

On the other hand, there are other groups who are DESOPADEC financial largess beneficiaries under the Youth empowerment scheme; they also swore to cut-off the head of Chief William Makinde should he continue to delay the release of their funds running into several millions of Naira.

The affected Youths, particularly the Urhobo folks alleged that rather than release their monies, Makinde and his Commissioners started acquiring tear-rubber SUVs and marrying more wives to the detriment of the funds beneficiaries.

The commission's CEO is alleged to have cornered a whopping N50 million recently and shared same with some PDP chieftains and cronies.

It was also alleged that the commission's helmsman dolled out some millions of Naira to Hon Eriatake Ibori, House Appropriation Committee Chairman of DTHA and daughter of Chief James Ibori, the Ogidigborigbo of Delta politics.

Makinde denied the allegation but reliable sources confirmed that he had to please Eriatake for her father's interest in the affairs of the commission and for favouring him with the commission's juicy job. To whom much is given, much is expected, was Makinde's response to his accusers.

Reports reaching the RDMG is to the effect that Fejiro Oliver will not stop brushing Makinde until he finally goes down or in the alternative settles Secretreporters with some mega red pepper. The battle will remain tensed as youths are also planning to take over the commission's premises in the near future over delay in the release of their financial entitlements.

Unfortunately for Chief Makinde, his media team is a set of lame-duck pen pushers. They cannot withstand the fire power from Fejiro's controversial corrupt pen. He will squeeze the hell out of Makinde and his men until something tangible is done.

Makinde is also likely to face media attacks from the various chapels of the State NUJ for what they described as "worthless Xmas gifts" from the commission.

The newsmen are bitter over the gross neglect and absolute disregard for their profession in the midst of corruption scandal wherein Makinde acquired three state of the art wheels and loaded his private bank accounts with the commission's funds.

I will do a follow-up article soon laced with facts and figures; revealing the massive looting and corruption that has bedeviled Gov. Okowa's new DESOPADEC.

Information reaching the WHITE EAGLE also indicates that EFCC will soon storm DESOPADEC to scan books of accounts. It is likely that heads may roll and some personnel of the commission docked for financial crimes.

In the meantime, I strongly recommend to Makinde to invite all aggrieved parties in an enlarge meeting of core leaders to iron out grey arrears to avert the foreseeable calamity at the commission.

It is obvious that Okowa's PDP administration is very corrupt and it is certainly going to be business as usual. What is playing out at DESOPADEC is sad and a complete show of shame for PDP government. Prosperity for Deltans remains a mere political campaign slogan. Nothing for Deltans; it is a pity.

The Author: Dr Fred Latimore Oghenesivbe is the convener and Director of Strategic Political Communication, Rescue Delta Media Group (RDMG) of the APC Delta State Chapter. He is also the South-South GMB APC Media Director. He can be reached on WhatsApp: 08099000058. Email: [email protected]