Help Us National Assembly, We Have Malaria 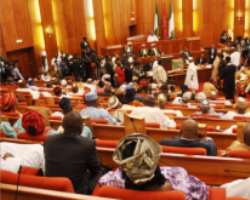 But there are other issues which arise from having a National Assembly that has a budget of N227billion, and from having only N221billion allocated to the entire health ministry from the N6trillion recently announced by Mr. President. Such issues arise from the realization that in the whole of the West African sub-region, Nigeria is the one country where all the funds for Insecticide Treated Nets, ITNs, for children in primary and secondary schools, are not from domestic funds but come from international donations. From 2011 to 2013, countries like Cape Verde, Algeria, Ghana and Cote d'Ivoire have collaborated with the World Health Organisation WHO to contribute something from their purses for antimalarial treatment. South Africa does not receive any international contribution for antimalarial treatment for children. As a matter of fact, I know of a certain South African organisation which distributes an antimalarial drug for children on the African continent free of charge. Even though a lot of these donations and contributions may have certain unseen pecuniary gains attached to them, they underscore the fact that malaria is still a big issue in Nigeria, and especially with children. World Malaria Report 2013 has it that over 300,000 children under the age of five die from malaria every year. If that info is correct, it means that every minute in Sub Saharan Africa, and Nigeria in particular a child is likely to die from a disease as preventable as malaria.

What is needed to prevent malaria from killing our children is money. We need money for insecticide treated nets. We need money for safe and clean neighbourhoods. Nigeria needs a lot of the monies that are lying fallow at the National Assembly. And at a time like this in Nigeria when everybody is conscious of the fall in the price of oil, and at a time when the administration of President Buhari is considering the application of zero-based budgeting for capital projects and for recurrent expenditure, I do not see the rationale in the bogus allowances that members of the national assembly and indeed every office at the three arms of government collect. In theory and practice, a zero-based budget does not take into cognizance that you were once a beneficiary of a certain amount of money. What is gorgeous about the concept of zero-based budgeting is that it operates from a zero-baseline, and ignores the fact that you once got N20million because a certain statute says so. If you need that N20million this year, then it behooves on the institution that wants to collect that amount of money to do a line by line analysis of what it actually needs that amount of money for. In the final analysis today, and in the face of the fact that a Nigerian child dies of malaria every minute because there is no money to buy vaccines for children, can the National Assembly truly convince itself that it still needs furniture, vehicle maintenance, wardrobe, entertainment, recess and domestic staff allowances? The annual salary of a Senator is just a little above N2million; but it is the allowances for a single senator, running into more than N400million annually each for the 109 Senators, and nearly a billion annually for the 360 members of the House of Representatives that run the bills as highly as they do.

In his recommendations in the executive Summary of National Assembly and the cost of governance, my oga Eze Onyekpere said that he would like for the NASS to continue to be a full-time job whilst the bicameral federal legislature should be retained. I agree. The National Assembly is the arm of government that checks the executive. Without it our democracy would be armless. But because we would need a lot of the money being used to maintain our Senators and MPs for children dying of malaria and other diseases, I'd rather that participation and membership of the National Assembly be voluntary and un-paid for. The Salaries they can keep but the allowances we need for malaria treatment for our children with malaria.