Don’t Park It Here; It’s At Your Own Risk 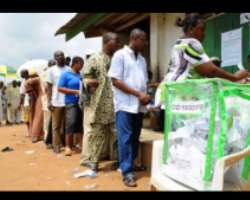 Like they attempted in Bayelsa State, the APC plans to park the rigging vehicle in Rivers State, as the hierarchy of the party has concluded plans to rig massively beginning from the re-run of National Assembly elections. This fact is known to all, as all top APC members have made pronouncements in this direction.

The judicial armtwisting car has been parked in Rivers State and other Oil-bearing South-South States and the products of the car have impacted negatively on the people’s electoral mandate. Without doubt, there is very little that the populace can do in the present circumstance where the fate of over two million voters have been handed over to a judicial system that the Chief Justice of Nigeria admits requires an immediate overhaul.

While we expect the much talked about overhaul of the compromised judiciary as promised by the Chief Justice of Nigeria, we must declare that this country has never had it this bad. Even in the days of Obasanjo and Obasanjo, the judiciary stood her ground and dispensed justice. It was the same during the leadership of Late Yar’Adua and then Jonathan. For this dispensation, the situation is begging for intervention. No justice in sight for states believed to be the resource base of the nation.

There is no need spending time on the irregularities of the judicial pronouncements against Rivers State. However, we must point out a few. It was proven that Yobe State Resident Electoral Commissioner collected bribe to manipulate the elections, the tribunal and the appeal court upheld these elections because the APC won Yobe . In Lagos State, INEC used both card reader and manual accreditation, and the courts up to theSupreme Court upheld it. However, in Rivers State, the tribunal and Court of Appeal re-located to Abuja preferred sentiments to the tenets of the Electoral Act and the constitution.

The unprincipled pronouncements of these courts have led Nigerians to the considered view that there is a grand conspiracy to illegally capture Rivers State using untoward tactics.

Those behind this plot are unhappy that Governor Nyesom Ezenwo Wike has exposed this plot to the domestic and international communities. Therefore, they have tried without success to mislead the unsuspecting public.

However, Governor Wike's position on this matter is quite simple. Nobody would be allowed to rig any election in Rivers State. He made it clear that there will be consequences for INEC official who decides to participate in the ungodly grand design to rig elections and hijack the state’s finances.

Wike's statement declaring that any INEC Officer who plots to rig the forthcoming National Assembly re-run elections in the state does so at his/her own risk is a statement hinged on his commitment to the rule of law and the development of the state.

All well-meaning Nigerians have commended the governor for rising in defence of the resources and mandate of the people of Rivers State. Those uncomfortable with the position of the governor to stop electoral fraudsters are mainly politicians neck-deep in electoral fraud and mischief.

It is a statement based on the reality that the people of Rivers State at all times will protect their votes and mandate irrespective of any attempt to use security forces to manipulate the process.

It is a statement hinged on the fact that Rivers is a PDP state and nobody, no matter how mischievously cunning would be allowed to use security forces to compromise the electoral process.

Those who are edgy about his statement of fact should hide their heads in shame for plotting to connive with criminal elements to subvert the collective will and mandate of Rivers people . It is important to reiterate that Rivers State is PDP and the party enjoys unprecedented following as a result of Governor Wike's superlative performance.

Nobody should test the resolve of the people to protect their mandate. In Rivers State rigging is not an option because the people have made their choice to always support the PDP and Governor Wike.

The forces of evil tried to manipulate the governorship election in Bayelsa State, but they failed because the people stood their ground. A party that came to power singing change has metamorphosed into a platform for electoral misadventure and the regrettable plots to subvert the collective will of the people.

Rivers State will never be captured by the forces of darkness. In just seven months, Nigeria has lost her judiciary and her security agencies to desperate politicians masquerading as change agents. The people of Rivers State have made their choice and they will never succumb to external manipulations and pressure.

Rivers people will not be intimidated into embracing criminals who mismanaged over N3trillion in eight years. The same people who are being promoted by the APC National with the use of the judicial process and other agencies had eight years in government, but chose to use state funds to sponsor political campaigns rather than develop the state. The state is now in safe hands under Governor Wike and the PDP.

There is no need attempting to park this ugly car of fraudulent inconclusive and manipulative elections here in Rivers State. The train of development has left the station. It will therefore be dangerous to park a car in front of a moving train. The people’s votes must count.

This advice is not a joke.Dont park the APC fraudulent car filled with electoral fraud, corruption, diversion of Rivers resources and False propaganda here. If you do, there will be consequences.