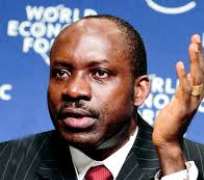 Every team which is serious about 'change' starts with a clear identification of the baseline from which it measures deviations/progress. Nigeria has had 16 uninterrupted years of democracy with the PDP controlling the federal government as well as majority of the states. APC is now in charge at both the centre and majority of the states. A minimum standard for measuring 'change' is the extent to which APC government beats the record of the PDP in measurable terms. As the saying goes, if you can't measure it, you can't improve/change it!

Government must strengthen the National Bureau of Statistics (NBS) and preserve its independence to produce and publish credible national statistics. It needs serious funding. I really wish our policymakers can be a little less careless or casual about the use of official statistics. I criticised the last government for relying on 'estimates' by World Bank staff instead of the NBS statistics. When I hear the narrative so far in the media by the new government regarding the economy, I take it largely as the kind of 'usual propaganda' new officials deploy to show that their predecessors “did nothing” and therefore lay the ground for claiming that they are “doing everything for the first time in our history”. Fortunately also, there are many people as well taking a hard look at the numbers and recording scores. At AfriHeritage, we are developing a template for measuring government performance. As Nigeria has largely evolved into a two party state in a democracy, I prefer to frame the discourse on the baseline as 'PDP's legacy and the APC's challenge'!

Since it is the practice to blame the PDP for every ill that befell our country in the last 16 years (and there are many of them) it is also fair to credit them with the positive ones. According to data from NBS, one outstanding legacy of the PDP is that in 16 years it held sway, it more than doubled the GDP of Nigeria (indeed with average year-on-year GDP growth rate in excess of 6% over the past 12 years, the GDP actually doubled within the last 12 years. It met average annual growth rate of about 2% and raised it to 6-7%, led by the non-oil sector. Yes, non-oil sector, and the “diversification” reported in the recently re-based GDP happened within the last 16 years. Will the economy more than double in the next 12 years under the APC? For me, if only the APC can double the size of GDP from about $550 billion to $1.1 trillion in 12 -16 years, and further half the poverty index, Nigeria will indeed be on course to be one of the largest 10 economies in the world by the end of this century.

As at 1999 when PDP came to power, Nigeria was largely a pariah state still lucky to have survived as one indivisible sovereign, especially in the context of the struggle by NADECO and restiveness in many parts of the country. On corruption, Transparency International scored it 1.6 out of 10 and ranked 98 out of 99 countries in 1999. Nigeria was listed among four countries that were non-compliant on the anti-money laundering rules by the Financial Action Task Force (FATF). We could not service our external debt and relied on stressful rescheduling, with all the intrusive donor conditionalities. Poverty was estimated at 70%, and unemployment at nearly 20%. The 1990s will go down in our economic history as the decade of stagnation: when per capita income growth was zero. Average oil price in May 1999 when President Obasanjo took over was $15.24 while stock of reserves was about $5 billion.

After 16 years, several challenges remain and some have even worsened (especially insecurity). Although President Jonathan's regime had the worst economic management relative to the resources at its disposal, it must be stressed that tremendous progress was made in the aggregate 16 years of PDP government. Yes, it should have left more than $100 billion in reserves but left only $30 billion (still about six times of what it met). We also wish that Jonathan's team did not leave Nigeria with unprecedented rate of debt accumulation.

But, according to statistics from NBS, the PDP handed over a $550 billion economy (largest in Africa and 26th in the world), with 7.5% unemployment rate (better than European Union, France, Sweden, Belgium, etc although the underemployment figure is much higher); 32%?? poverty rate (as claimed by the former Finance Minister, or 61%??: NBS needs to clarify this claim); a stock of reserves of $30 billion; GDP growth rate averaging 6% over last 12 years; a relatively more diversified economy, with ICT penetration from 0.2% to over 60%, and a new contributory pension scheme now with trillions of Naira in pension fund. Our external debt is down although total debt stock is escalating. Our Gini coefficient (degree of inequality) is not different from China's.

Nigeria has consolidated and stronger banking system that currently finances both government debt and the private sector, with a relatively vibrant capital market. The capitalization of the Nigerian Stock Exchange grew from less than N1 trillion to N12 trillion as at handover. For the first time, Nigerian economy is now rated by credit rating agencies (Fitch, and Standard and Poor's). Even on corruption perception, Nigeria is far better today than in 1999, and PDP created the two major anti-corruption agencies— ICPC and EFCC, and as at 2014 TI scored Nigeria 2.7 and ranked 136 out of 175 countries.

PDP secured debt relief for Nigeria, thereby relieving Nigeria from the stranglehold of the IMF/World Bank policy conditionalities. APC does not have to negotiate with Washington on many economic policies. The list is long. The point therefore is that despite the fall in oil price, APC is starting from a much stronger base than PDP did in 1999 and the challenge now is to do far better. In the coming years, Nigerians will be asking APC to show us their figures!

Interview conducted by The Whistler