A Note To The Ummah Leadership 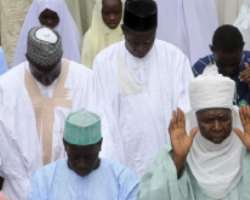 Overpowered by the urge not to live like an unconcerned faithful in Islam, it is with utmost humility and compassion that this sermon is delivered as a Save Our Soul (SOS) generally to the Muslims in their majority areas in Nigerian and especially to the leaders of the Nigerian Muslim Ummah, the emirs of Northern Nigeria and Muslim obas of the South Western states of Nigeria. Crystal clear is the fact that Allah (SWT) has given them the privileges to oversee the affairs of Islam in such a vast land with large population like Nigeria. But needful is to remind them that the cries of their Muslim brethren of the Southeast and South-South have saturated the two geopolitical zones, thus the time is overdue for them to rise to aid their brethren. Or have the tears of these economically and politically alienated people of Nigeria not reached the north and west? Have these leaders not seen these denied Nigerians wandering the cities of Nigeria seeking recognition and survival?

Voices from the affected persons, from concerned groups and from human-spirited Nigerians have raised these cases of political and socio-economical exclusion of Muslims of the Southeast and South-South from the affairs of Nigeria. Why the leaders of the Ummah have kept these dead silence and inaction over the years beats the imagination of these oppressed/suppressed citizens of Nigeria. Why the Muslims of Eastern Nigeria have never been given minor, not even equal, opportunity to serve their states and country on the political scene remains a case study for researchers and analysts. And why these oppressed elements have remained silent is quite understandable.

It is necessary to plead with the leadership of the Ummah to accept this note with open hearts and to act to the best of their abilities because Allah does not place a burden on a servant which the servant cannot carry. Let me quickly remind them that Islam has never been a primitive, reserved or imposing religion. The Holy Qur'an and the tradition of Prophet Muhammad (SAW) have outlined the best code of life and enshrined true brotherhood and system of governance. Let them stop entertaining the fear of tomorrow. Let them stop the feeling that Islam is preserved by the emirates, thus the fear that no other ethnic group can preserve or practise Islam better. Muslims from the minority can spread the religion by themselves if they are empowered. Let them share in the pains which their brethren in the minority areas suffer.

Nu’man bin Bashir reported Allah's Messenger (SAW) as saying: “The similitude of believers in regard to mutual love, affection, fellow-feeling is that of one body; when any limb of it aches, the whole body aches, because of sleeplessness and fever.” Secondly, Abu Hamzah Anas bin Malik (may Allah be pleased with him) reported that the Prophet (SAW) said: “None of you will believe until you love for your brother what you love for yourself.” In another narration, the Prophet (SAW) is reported to have said: “Beware! Whoever is cruel and harsh to a non-Muslim minority, curtailing their rights, overburdening them or stealing from them, I will complain (to Allah) about that person on the Day of Judgment.”

Ibn Malik reported that the Messenger of Allah (SAW) said: “Do not hate each other, do not envy each other, do not turn away from each other. Rather, be servants of Allah as brothers. It is not lawful for a Muslim to abandon his brother for more than three days.” Abu Huraira reported: The Messenger of Allah (SAW) said: “He who relieves the hardship of a believer in this world, Allah will relieve his hardship on the Day of Judgment. He who makes easy what is difficult, Allah will make it easy for him in the world and the Hereafter. He who conceals the faults of a Muslim, Allah will conceal his faults in the world and the Hereafter, for Allah helps the servant as long as he helps his brother.”

Prophet Muhammad (SAW), said in his last sermon. “All mankind is from Adam and Eve, an Arab has no superiority over a non-Arab nor a non-Arab has any superiority over an Arab; Learn that every Muslim is a brother to every Muslim and that the Muslims constitute one brotherhood. Nothing shall be legitimate to a Muslim which belongs to a fellow Muslim unless it was given freely and willingly. Do not, therefore, do injustice to yourselves.”

These ahadith are strongly correlated with the Golden Rule which is “do to others what you want to yourself” and that is to love for one's brother what one loves for himself. In our society, people seem shy to give advice or get offended to accept advice. But in reality, a Muslim should welcome advice and give advice in the best way. This is essential for the fabric of Muslim Ummah and for our personal selves. Muslims of the North should not feel different from those of the West or the East. Rather, they must feel belonging to the one and only true religion – Islam, guided by one holy book – the Qur'an and the tradition of the noblest Prophet Muhammad (SAW).

Another part of loving amongst the Muslim brethren is the push to seek to rectify the flaws of others through the best manner and approach. It is not in the interest of the religion to condemn or neglect a whole people because of the flaws of certain elements from among them. It has been observed that sometimes when some Muslims see the flaws for others, instead of working toward rectifying the difficulties in the flaws, they exploit them. They take advantage of the flaws and make themselves feel better. This is actually a disease in the heart that someone should 'do something bad in order to feel good'. Rather, a Muslim should fix the problems of his brethren and love them to able to grow in their relationship with Allah.

A similar characteristic in the aforementioned hadith is wishing brethren to have what one has and even more. This does not let one feel scarcity in mindset. Instead, it is a manifestation of realizing that Allah SWT is endless in His bounty. Sometimes, when one looks at what others have, there is that disease that makes one think that if they have it, then he cannot have it. But Allah SWT is infinite in His bounty and generosity. Allah SWT gives and takes as He pleases; so it should not make a difference if someone else has something as well as we have.

Holding oneself accountable is also an essential characteristic. One must be accountable and question his feelings towards his brethren in faith and humanity. A Muslim leader should seek to attain this level, to have this love towards a cause. This cause is a principle that engenders the love and knowledge that Allah can give and He is bountiful, and not by anything else. For example, Imam Shafi'i said that he would love for people to learn his knowledge and that none of it would be attributed to him; which shows how beautiful his character was.

The support of some Muslim leaders to the Muslims of Southeast and South-South cannot be underestimated, though. However, such support should not be limited to organizing mere study classes for them in the far north, offering them some Ramadan feeding supports, holding workshops/seminars for them and granting scanty scholarships to them. The Muslims of the two zones need appointments, empowerment and general upliftment to feel belonging like other Nigerians.

In a worrisome but hard-truth address delivered by the Catholic Bishop of Sokoto Diocese, Matthew Kukah, at a conference organized by the Islamic Welfare Foundation at the Fountain University, Osogbo the cleric carpeted northern leaders and accused them of using religion to deceive poor Muslims. At the event titled, 'The Muslim agenda for Nigeria: challenges of development and good governance', the cleric postulated, “A hypocritical elite continues to believe that it can claim the benefits of democracy but use it only to consolidate its hold on power. He concluded with a claim, saying, “It is my considered view that northern Islam has to confront the realities of taking its religion into the modern world of democracy seriously. Muslims in northern Nigeria cannot accept democracy and reject the inclusive nature of its philosophy as it is the case today.”

Democracy demands inclusiveness. Islam preaches inclusiveness. But over the years, Muslims of the Southeast have totally been excluded in the political machine of the nation. And the reality on ground shows that Nigerians bearing Islamic names and of northern extraction have led Nigeria for a long time. They could not produce a single influential Sheikh in the Southeast. Nigeria can boast of very well-established and empowered clerics like Rev. Kukah who, in far northern Sokoto state, is recognized by the federal and state governments of northern states. Nigeria can boast of Christian multi-billionaires who are celebrated in far northern Taraba, Adamawa, Kaduna, Bauchi and many other northern states. They hold national honours and have the powers to influence or affect politics in their respective states, despite their minority status. Those privileges were given to them to thrive.

But down in the Southeast, Muslims celebrate the sarkin Hausawa and obas of every state and city of the zone. Muslim leaders of Nigeria should explore socio-political and economic empowerment of the Muslim minority. Islam, which is the solution to contemporary challenges in the country, will permeate and an equilibrium will be created in the quest to develop Nigeria beyond ethnic and religious lines.

How long shall Muslim minority of Nigeria remain in this condition? And how long shall the Muslim majority of this country remain complacent and continue to allow this? Nigerian history has records of Christian powerbrokers and super-masters in the north, but no such in the Southeast Muslim minority region.