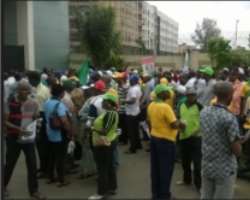 The STAR – System for Transformation and Result – methodology of measuring impact is a change process and a tool suite that seeks to promote sustainable organizational development. It also seeks to address elements of the complex environments in which Civil Society organisations do their work. It is a programme developed by Root Change. Judging from lessons learnt from two decades of how CSOs do their work, the programme is what the SACE – strengthening advocacy and civic engagement – project uses to assess the impact of NGOs and CSOs in bringing about transparency, accountability and good governance. Central to achieving transparency and good governance is the question of the ability of Civil Society organisations to interrogate policy makers and ask hard but sensible questions. Are civil society groups better equipped now to deal with the civilian government now than they were in the days of the military? If not what then seems to be the impediment in constructively engaging our civilian government and what impedes their ability to help with formulating policies that are people friendly? Why is it that civil society groups seem to be working at cross purposes with the media and the civilian government? How should CSOs build capacity, network and form alliances that put them at the front burner of national discourse. Are CSOs sharing their knowledge, or are they tiny clusters of islands with ideas that are marooned in a sea of opportunity? Twenty years from whence CSOs began to be the 5th Estate of the realm in Nigerian politics, what impact have they really made?

These were some of the questions that were to engage the minds of a distinguished audience put together at the Barcelona Hotel, Abuja on the 14th day of December, 2015. Under the Strengthening Advocacy and Civil Engagement, SACE, a project being implemented for the USAID by Chemonics, participants at an evening of discussion and conversation were to listen to three Civil Society icons well established in the fine art of civil engagement and advocacy. I know Clement Nwankwo, who was a founding member of the Civil Liberties Organisation CLO, and who is now executive director of Policy and Legal Advocacy Centre, PLAC. But the other duo – Hajia Saudatu Mahdi of Women's' Rights Advancement and Protection Alternative, WRAPA, and Hon Igariwey Enwo, lawyer and politician and civil society advocate – were not as popular as Nwankwo. But what was to come from the one – Hajia Mahdi Saudatu – opened us up to another mindset which most CSOs did not know existed in the engagement and advocacy process.

That evening, Clement Nwankwo told us that the CLO of 1987 was set up with only one motive – to drive the military from power, and install a civilian government. The tactics and the ground rules favoured the use of linguistics and brashness of trench warfare – 'they' were there at the other side and we were here on this other side. We threw verbal bombs at them and they replied and charged at us like rhinoceroses, picked up and jailed our leaders. At the extreme, they would have killed our leaders just the same way General Abacha did Ogoni leader Kenule Saro-Wiwa and thereby provoke an international outrage. At that time as well, those at the forefront of the call for the military to leave were lawyers. Their argument then was that leadership as proffered by the military was antediluvian and an anathema to the concept of transparency and good governance. It's a merry crowd now, and the merriment is apparent with the crowd of CSOs in the fray. But soon after the military were out of the system, several issues began to crop up. Corruption became rife – rifer than what we had with the military. Some of us wonder if indeed some of the monies said to be stolen actually exist. In a Citizens Score Card report published by the Africa Network for Environment and Economic Justice, ANEEJ and Leadership Initiative for Transformation and Empowerment, LITE-Africa a few days ago in Benin City, more than 84 projects that were supposed to have been executed by the Niger Delta Institutions – DESOPADEC, EDSOGPADEC, Niger Delta Development Commission, the Ministry of the Niger Delta, OSOPADEC have been abandoned. Even the anti-corruption agencies set up to fight the massive cases of graft and corruption have been taken hostage by judicial, the executive and legislative shenanigans. Under the civilian governments from 1999 impunity, gross human rights abuses, poverty and underdevelopment have been institutionalized. And the questions were: what is to be the mode of engagement and advocacy for transparency and good governance in the Niger Delta in particular and Nigeria in general? Should CLOs continue as if we are still under the gulag of the military irrespective of the flowing agbadas and babanrigas?

The one person who seemed to have developed an effective advocacy strategy and tactics in that hall that evening was Hajia Saudatu Mahdi coordinator, Women's Rights Advancement and Protection Alternative, (WRAPA). Mahdi has helped to develop a national law on violence against women – the legislative Advocacy Coalition on Violence against Women, passed in 2015. To achieve this, Mahdi said she developed her own set of rules. The first thing she did was understood the context of what she was fighting for – a fight on behalf of very vulnerable persons – teenagers being married off to very wealthy senators and politicians. Two she interacted with, and formed a strong alliance with three key stakeholders – the media, the policy makers and took in the counsel of very knowledgeable persons. She carried everybody along, not minding if it was a big NGO or a small one. 'I had a woman problem but the key persons who helped in the fight were men', she said. Mahdi also spent some money to 'make noise' – underscoring the fact that if you have courage and conviction, you were not to consider the policy makers as enemies. You would see them together with the media, as partners in progress.

But it was Otiveh Igbuzoh, executive director of African Centre for Leadership who nailed it at the end. He said that many of us CSOs still carry the mindset that the military is still in power. In trying to promote transparency, accountability, many CSOs are still in the trenches, hurling bombs and grenades at the civilian government. To strengthen the supply and demand chain, forge partnerships, sustain the dialogue, Otiveh believes that CSOs must collaborate with government as frenemies instead of seeing them as enemies.

It was a good evening to rethink and retool, and I have already expressed my appreciation to my ogas – the Rev David Ugolor and Leo Atakpu – ANEEJ executive director and deputy respectively for the opportunity of this engagement. The evening opened my eyes to a new level of engagement and advocacy, what Charles Abani, SACE chief of Party describes as the 2.0 Mindset series. I was to realize the importance of this evening in my little contribution to the discussion when a fellow CSO has accused our organisation, ANEEJ, as being 'too friendly' and supportive of government policies. I have had to remind my comrade – again, that we at ANEEJ prefer to be seen as being 'too friendly' with government and get the job done than to be seen as a champion of a cause but without a result to show for all of our derring-do. We believe that today, civil society engagement and advocacy with key stakeholders and policy makers cannot be same-o-same-o.

Coming from the standpoint that we cannot still be doing things the same old-fashioned way, I had an axe to grind with the WRAPA coordinator. In today's world, we no longer talk of gender empowerment. People are talking of gender mainstreaming – a situation where you fight for the rights of both sexes instead of focusing on feminine issues. Focusing only on fighting for the girl child or fighting women issues effectively checkmates whatever chances that the boy-child – the Almajiri or the boy-child in eastern Nigeria would ever have in a dynamic country like Nigeria. I also believe that had Clement Nwankwo known that the civilians who would take over from the military would be this less than accountable and transparent, perhaps we would not be where we are today.