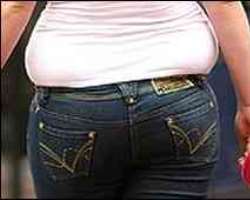 A wider waistline carries health risks
People are blinkered to the health dangers of carrying excess weight around the waist, say experts.

Most people have no idea that their spare tyre or muffin top puts them at increased risk of cancer, diabetes and heart disease, a poll of 2,085 shows.

In all, 97% of people were unaware of a link despite 71% of those surveyed saying they had an expanding waistline.

Dr Mike Knapton of the British Heart Foundation
Excess weight around the middle generates oestrogen and excess chemicals in the stomach, which put people at higher risk of killer diseases.

Dr Mike Knapton, of the British Heart Foundation charity which is working alongside Cancer Research UK and Diabetes UK, said: “That 'harmless' spare tyre around your waist is actually a major health hazard.

“While you might be relaxing at home, your fat cells are working overtime to pump out excess hormones and other chemicals that can cause disease.

“Wrapping a tape measure around your middle takes just a few seconds, but it could be your vital first step towards a healthier future.”

Waist size is likely to increase throughout life, but many are in denial about their spare tyre, say the charities.

In the poll, women were less likely than men to worry about the health consequences of their muffin top and instead were more concerned with how they looked and whether they could fit into their clothes.

Less than half of men and women (44%) had tried to do more exercise as a way to avoid going up in belt size.

Some 27% of people had bought bigger sized clothes.

As part of the campaign, the charities are calling for standard labelling on foods, highlighting the “traffic lights” system for nutrition.