WHO IS THE NEXT HOLBY CITY WOMAN? 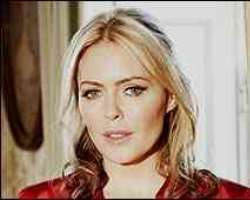 By Brian Wheeler
Political reporter, BBC News
There is a strange breed of semi-human creatures which only emerge at general election time.

Patsy Kensit is Holby City Woman – but are you?
A product of the overheated imaginations of pollsters and politicians, they hang around for a while purporting to offer insights into the way the rest of us think before drifting off into irrelevancy.

Remember Mondeo Man? Tony Blair spotted him buffing up his prized motor some time around 1994 and decided he was the just the sort of middle-of-the-road but aspirational figure New Labour should be targeting.

He was last seen hanging around a second-hand car lot, mumbling about broken promises and furtively eyeing up a Tory election poster.

In 1997, the Tories had Worcester Woman – a provincial swing voter the party thought they needed to convince to win that year's election. Needless to say she was not swayed.

In 2005, Labour briefly flirted with Bacardi Breezer Woman – under 25-year-olds who were in danger of losing touch with democracy (and possibly consciousness).

Motorway man
Among this year's contenders is Holby City Woman – a female voter in her 30s or 40s, who works in the public sector, named after Faye Morton, the character played by Patsy Kensit in the long-running BBC drama.

Holby City Woman was identified by Tory strategists, along with the other big target of this election campaign – Motorway Man.

Motorway Man voted Labour in 1997 but his party allegiances are weak.

He is in his 30s and has a young family. He is presumably married to Motorway Woman. But her name does not lend itself to alliteration.

He lives in a semi-detached house, drives a mid-range saloon car, and dreams of trading up to a detached residence one day.

He likes surfing the web, foreign holidays and going to the gym.

Creative
It is easy to mock these crude electoral stereotypes but the fate of the country can sometimes rest on their fictional shoulders.

Due to the quirks of the British electoral system, the next government is often decided by a few thousand voters in swing seats.

That is why geography is so important in identifying political targets.

The most important fact about Motorway Man and Woman is that they live in a string of marginal seats along the M1 and M6 motorways. Hence the name.

These are the seats that the Tories must win to stand a chance of forming the next government.

But do you even recognise Motorway Man? Or do you think it is time to come up with some new labels that more accurately reflect the hopes and fears of the British people in 2010?

Something more in tune with these straitened times. Worried Woman perhaps, or County Court Judgment Man?

This is where you come in.
We want you to dream up political targets that will really give the party strategists an insight into modern Britain and what voters actually want.

Be creative and funny – but remember the politicians are watching. With a bit of luck, your ideas might just catch on.