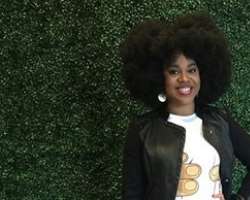 Sultry Nollywood actress, Stella Damasus, has shared a new look of herself rocking an Afro hairdo.

The actress who had the 12 years remembrance of her late husband, Jaiye Aboderin, few days ago seems to be creating more time her online radio than her acting while caring for her family.

Known for her good interpretation of roles in movies, the actress has faced a lot in the industry and even after the death of her husband but she has not allowed that weigh her down as she continues to make a name for herself

Having a nice time with Daniel Ademinokan, former husband of her fellow actress Doris Simeon, Stella looks good in her new style which she refers to as “big hair” better known as Afro.