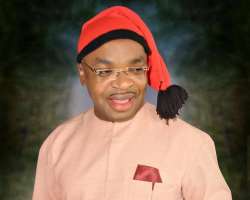 The good Book states clearly that only God chooses a leader and gives to every society the kind and genre of leader it deserves. That was why when the glory of God departed from Saul, he began to have some degree of insanity which ensued till the day he died (1 Samuel 18: 10). Does this not justify the commonly used axiom that "he whom the gods want to destroy, they first make mad"?

The people of Akwa Ibom were in dire need of a leader who would deepen the infrastructural revolution in the state through the creation of jobs, amelioration of poverty and reduction of social inequalities hence the emergence of Udom Gabriel Emmanuel as fourth democratically elected governor of Akwa Ibom State.

The divine mandate shall subsist unruffled, irrespective of the antics , intrigues and propaganda of the opposition APC in the state, which has deployed a conspiracy theory aimed at upstaging the status quo in the state. This started with their alliance with the Hausa/Fulani/ Yoruba power elite and was perfected with the engagement of surrogates for the purpose of smearing the character of the purveyor of the divine mandate, Governor Emmanuel and the institutions of government in the state.

Their aim is to demonize the Governor and ultimately destroy the goodwill which he has ; asset for the political, social and economic emancipation of the state. The infiltration of the media such as radio (planet fm), designated newspapers such as the Guide, Global Concord, The Post, Insight, among others, where they execute their smear messages is commonly known.

These conspirators know that, with the preponderance of goodwill at the disposal of Governor Emmanuel and the degree of support by both 'the productive elders' and the youth of the state (optimum population), the governor can always have his way in enacting and executing good policies for the wellbeing of the people.

That informs the voluntary battle I and other true lovers of the state are fighting against the evil orchestrations of the APC in the state. We started off by ensuring that zoning- an egalitarian political culture was enthroned in the state, and crowned it with the search, adoption and support for the purveyor of the Divine Mandate, Governor Udom Emmanuel.

For me and others who see our daily verbal and online debate as a battle to save the soul of Akwa Ibom State from the "spirits of doom"- the fallen angels, we shall remain undeterred and with impetuous resolve to achieve the object of the "final push".

This is akin to a war of national liberation, which is embarked upon with zeal and oiled by passion and political will to serve the next generation from doom and economic damnation. It reminds me of General William Tecumseh Sherman thought which align with mine vis-a-vis the struggle to protect the divine mandate:

"My aim was to whip the rebels, to humble their pride, to follow them to their inmost recesses, and to make them fear and dread us".

As a student of Power Politics and Strategic Studies, I was thought by Professor Otoabasi Akpan, Dean of Arts, Akwa Ibom State University, that "War is the continuation of political intercourse by other means". This was aptly given strength by Carl Von Clauswitze and Winston Churchill, the British Statesman who later became PM of Britain. War, Clausewitz noted, " is not merely a political act, but also a political instrument, a continuation of political relations..." Churchill also amplified on the need for timely intervention to avoid unanticipated consequences:

The "War" to defend the divine mandate must continue. The time to protect Akwa Ibom from the expanding frontiers of the Hausa/Fulani Imperialist is today. It is a battle to safeguard our God-given resources from external incursion and internal collaborators exemplified in in the APC and it's co- travelers. It is a battle for which I live for and if need be, prepared to die for. The people of Bayelsa State have risen up to the occasion and ours cannot be an exception.