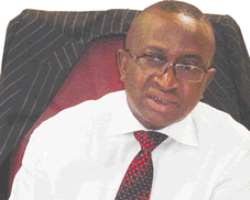 Ndoma
Victor Ndoma-Egba (SAN) is a Deputy Senate leader and represents Cross River Central in the upper chamber of the National Assembly. Contrary to the impression of many Nigerians, the former chairman of Calabar branch of Nigeria Bar Association (NBA) believes that the lingering crisis of President Umaru Yar'Adua and the politics trailing it has made Nigerians wiser. In this interview with Sunday Sun, he bares his mind on a wide range of issues. Does the reconstitution of a new cabinet by the Acting President, Goodluck Jonathan suggest that he is fully in charge? Does that put to rest the question of whether he has the will to lead Nigeria?

As acting President under section 145 of the 1999 constitution, he has the full presidential powers. There are no limitations on his way to act as the President and it is within his powers to dissolve the cabinet if he feels it is necessary to do so. But some commentators say that the letter is important and that the dissolution of the FEC can be challenged in court.

There is nothing that cannot be challenged, but I can assure you that Jonathan is standing on a very strong wicket constitutionally. The constitution says a letter must come from the President but none came and the NASS acted on necessity and made Jonathan acting President. From your vantage position, will that stand legal scrutiny?

The Senate decision stood on two grounds in resolving the issue of President Yar'Adua's absence. One is the transcription of the British Broadcasting Corporation(BBC) interview. Section 145 says that 'whenever the President transmits to the President of the Senate and to the Speaker of the House of Representatives a written declaration that he is proceeding on a vacation, and that he will not be able to discharge the duties of the President…'. a written declaration is what the constitution said, it does not state the format and it does not say it must be exclusively to the Senate President and Speaker.

With today's technology, it is possible to transcribe every broadcast. What Yar'Adua said on BBC is found in written form on the Internet. It is a declaration to the world at large and that does not exclude the President of the Senate and the Speaker of the House of Representatives. It includes them too. Yes, it is stretching the provision of section 145 but in resolving the impasse, the Senate has to be resourceful. I can assure you that if the matter is challenged in court, we will meet them with very robust argument. I don't see anything in Section 145 restricting the manner of the declaration to any form.

Which areas will you want the acting President to work on immediately?

The issue of security is one that I will want him to look at. The Jos killing is still fresh in our minds along with the Warri bombing. There is a general feeling of insecurity and I think he should face that squarely and tackle it for the general good of all. He needs to restore confidence and comfort that the government is on top of the nation's security.

I believe that if he should look at these issues, then he won't be accused of not doing anything. There are other issues like health and infrastructure but the two issues of security and Niger Delta are very important and critical.

Do you agree with those who insist that the PDP did not handle the issue of Yar'Adua's sickness and the transmission of power well?

The party could have done better but we need to remember that our democracy is just teething. Problems and issues never envisaged by the constitution are cropping up and they are the ones we are tackling and I want to say that is the very essence of democracy. We are being able to resolve the crisis and challenges we are facing, that is the joy of the whole issue.

There is a lot of tension over the matter and some opposition politicians say it was orchestrated by the PDP. They claim it is just power play within the PDP to cover up its inefficiency; do you agree to that claim?

When you are dealing with ill health, you need to be very careful, in contemporary Nigeria, we have seen people who are sick having long life while those that are healthy have died before them. We need to be very careful. We have cases that appeared hopeless but the people recovered. The issue of health is totally beyond man and you cannot rush it.

With all due respect, those saying we should have done this or that are either playing to the gallery or they are playing God. Matters of health, lives and death are beyond human competence.

Some people also frowned at the increasing influence of the Governors Forum and they say this is unhealthy because the law does not recognize that body. Do you share that sentiment?

One good thing about democracy is the freedom of association. Governors are free to associate and dissociate and to canvas particular point of view. One thing I want to point out is that the National Assembly, especially the Senate, has also emerged as a power bloc in the country and that is a very good thing that I will want people to look at.

It is widely believed that the governors goaded the NASS to name Jonathan as Acting President.

In what way did they do that? The National Assembly initiated and executed it with no input from the governors and that is the truth. We did the resolution and I remember that we had already passed the resolution some three weeks before that urging President Yar'Adua to pass the letter across to us. The first time I attempted to discuss the matter was on December 1, 2009 when I tried to raise the matter on the floor of the Assembly. The Senate since then did not waiver and to the best of my knowledge, we were not forced to do it.

Some people from Cross River Central Senatorial district are agitating that you should not represent them for the third time running, they are saying you should give way for another person, how do you react to that?

I will say it shows the beauty of democracy. I like it, democracy is about competition and I think we are going about it in a courteous manner. However, I want to call on the people to look at the constitution. There is nothing in the constitution that says we can't go for it. The people saying no to third term are in the minority. There is another silent mass that are saying we should build on what we have achieved and allow the status quo to remain. So, they are voicing their own opinion and they are entitled to it and those saying the status quo should remain are also voicing their own opinion and I think they will go into a contest and a winner will emerge.

Are you sure you'll be the winner of that contest?

I believe that the people I represent are happy with the way I have been representing them and they have no problem with my representation.

What is it that you have been doing for them to want to support your return to the Senate for a third time?

It is easier to assess against promises that are made. I made just one promise to the people I represented in 2007. I promised to give them a loud and clear voice and I am going to serve them 24 hours and seven days in a week. Today, when I speak, I am sure they are aware that I am speaking for them. I am also satisfied that I have fulfilled my promise. My constituency appreciates that today they have a voice that is loud and clear representing them in the Senate.

How can the problem in the Niger Delta be solved?
The Niger Delta situation needs a cocktail of solutions all of which must be in the pot at the same time. One, you must address the issue of the environmental degradation as a result of oil exploration. Two, you must address the issue of the people participating from the natural resources that derived from their area. Three, the issue of infrastructural development is important. Value added to their social lives and I would also advocate that the Niger Delta should be transformed the same way Abuja is changing and it is possible. If the government demonstrates that it wants to do it, it is possible.

Why is the money budgeted not being felt by the people of that area?

I believe that that is for the executive to explain but I am aware that there is a general concern that in spite of the fact that money is appropriated, the development there is too slow. The people want to see more of action and less of talking.

Do you think this action should include state governors who collect derivation and yet there is slow development in the area?

You can't limit the blame to just one group. Yes, there are questions on what have been done with the money they received for the last ten years. I have heard that, but the fact that some people have questions for states on what they have done with the money they received does not absolve the federal government from its own responsibility to the people of the region. It is not an excuse. I agree that the states might be culpable but the federal government is also very culpable too.