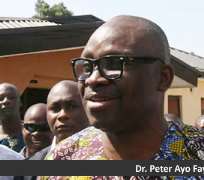 The Founder of Afe Babalola University, Ado-Ekiti (ABUAD), Aare Afe Babalola (SAN), has said Ekiti State Governor, Mr Ayo Fayose, has and is showing the zeal to re-position education in the state and restore its lost glory.

The renowned lawyer, who commented on the Education Summit organised

by the state government, said a similar one organised during Fayose's

first term, really improved the standard of education in the state and

catapulted it to among the best in the country.
In a press release in Ado-Ekiti yesterday by the governor's Chief

by the performance of students from the state in public examinations.

On why he is throwing his weight behind the governor and the summit,

Aare Babalola said: "I must say nobody must have any doubt about my

position. I love this man, I love him because we have something in

common. He's a man of action, I love him because he's a realistic man.

He's dynamic, he's fearless, and when he says yes it is yes, when he

says no it is no, this man is energetic and you need an energetic

person to carry out anything you want to do.
"If you care to watch the television recently, particularly what Mrs

Adeyemo showed us, you would agree with me that the 2003 Summit was a

success, the follow up was a success and Governor Fayose’s

administration during the period was a success.
"If you ever go to court of law, when a judgment is going to be read

in respect of a case where five judges preside, the presiding judge

will ask the person who wrote the judgment to read it, then

he'll ask the second, what's your own view, if he agrees,

he will say I agree, if the second one disagrees, he will read out his

own judgment which is contradictory to the majority one. When

everybody has been consulted and the majority of them say

the plaintiff has won, that's the judgment of the court.

"In my own case today, I have listened to the submissions of everybody

and I agree intoto with what all of you have said. I now want the

success.
"It was a success in education, and we saw it, when you come from 35th

position to 7th, that is A+, you won A+ Fayose. What I will submit and

we did that time for Ekiti in education and if you do that, all of us

will have cause to thank you at the end of your term."

Aare Babalola, who commended the energy and zeal with which the

governor handles state matters, sought the cooperation of all with the

governor to make Ekiti a pride of all.
The ABUAD founder also charged parents and guardians to be ready to

sacrifice whatever it would take to give their wards quality education

and to note that government alone cannot do everything, as citizens

must offer their support.