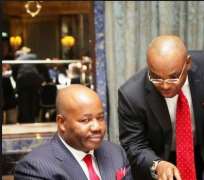 Contrary to speculations fuelled by the All Progressive Congress (APC), Akwa Ibom State that there was no election in the state because of the discrepancy between the number of people accredited from the card reader and the total number of votes cast, the Peoples Democratic Party Thursday subpoenaed the Independent National Electoral Commission (INEC) to produce Accreditation Incidence Report Forms which proved that there was election in Akwa Ibom State.

The incidence forms, contained in three giant bags, popularly referred to as Ghana-Must-Go were tendered before the Justice Umar Sadiq chaired tribunal in Abuja by Mr Obinna Ayogu from the Independent National Electoral Commission (INEC) in Akwa Ibom State. One of the bags was physically brought into the court room and examined.

It would be recalled that the Akwa Ibom State INEC Returning Officer, Prof. James Ekpoke, had declared Udom Emmanuel of the Peoples Democratic Party, PDP, winner of the April 11 governorship election in the state. Udom polled 996, 017 votes to defeat Umana Umana of the All Progressives Congress, APC, who polled 89,865 votes, while the LP and Accord Parties polled 86,000 and 10,000 votes respectively.

The total number of votes cast in the state stood at 1,182,534. However, the All Progressive Congress (APC) in Akwa Ibom State have alleged that the number of accredited voters for the election is 647,215 going by the card reader but with the tribunal admitting incidence forms that proves that both manual and electronic forms of accreditation were employed during the April 11 polls.

19 Witnesses for the winner of the election, Mr Udom Emmanuel and 4 witnesses for the 2nd respondent, the Peoples Democratic Party (PDP) had all testified under oath that two methods of accreditation were used during the elections and that in the circumstance that the card reader did not work, manual accreditation was done and incidence forms were made available at polling units as stipulated by the electoral umpire.

The All Progressive Congress(APC) are calling for a re-run of the April 11, 2015 governorship elections in Akwa Ibom State. The tribunal has adjourned till Friday, September 11, 2015.