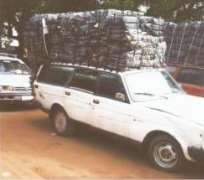 The Nigeria Customs Service has recorded seizures of Frozen poultry

Eleven Thousand, Five Hundred Naira).
According to NCS management in a statement, seizures were recorded in

“Operation Hawk Descend”.
The seizures which consists of 3,247 cartons of the banned products

were impounded at different locations along the south western borders

of Nigeria.
These includes Badagry, Agbara, Seme, Gbaji, Owode Creek in Lagos and

the Idiroko axis.
The breakdown of the seizures showed that in Ogun, 1,120 cartons of

frozen poultry products valued at about N5,040,000 million. Others

"While commending the steadfastness of its operatives, the management

assures the general public of its determination to continue the

onslaught against the smugglers of the banned products," the statement

said.
Traders and consumers of the banned frozen poultry products are

advised to patronize local farmers as this will create job

opportunities for our youths, boost our economy and save Nigerians

from diseases associated with consumption of dangerous chemicals used

in preserving the banned poultry products.