'I Am Better Than Mi, Mode 9, Naeto C And Others' - Vic O Brags On Mtv Base Real Talk 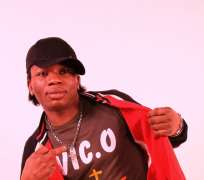 He revealed this on this week’s edition of MTV Base Real Talk anchored by MTV VJ, Ehiz. Asked to list the names of rappers he thinks he is better than, the Italian based rapper reeled out the names of the rappers and added,

‘I am not only better than them, I will beat them at the rap battle and they all know about it. I can beat them because I know what I can do’.

Vic O also speaks about his relationship status while answering a fan @sexyjoana who asked if he had a girlfriend, ‘Well, I got one girl. Although she is not with me, she is in the United States. Everybody can come and have me, I’m free. I have a white lady, she’s my girlfriend but I’m single’ he said.

MTV Base Real Talk is a one on one show hosted by MTV VJs, Ehiz and Stephanie which allows fans connect with their favorite celebrities via social media; No questions are off-limits, secrets, guilty pleasures, old memories, phobias and everything is brought on the table.

Catch MTV Base Real Talk with Vic O and Ehiz this Sunday at 8:30PM on MTVBase channel 322.