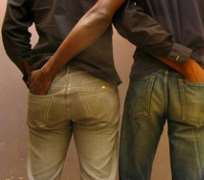 “That evening the two angels came to the entrance of the city of Sodom, and Lot was sitting there as they arrived. When he saw them, he stood up to meet them… as they were preparing to retire for the night, all themen of Sodom, young and old, came from all over the city and surrounded the house. They shouted to Lot, ‘Where are the men who came to spend the night with you? Bring them out so we can have sex with them.

Lot stepped outside to talk with them, shutting the door behind him. ‘Please, my brothers,’ he begged, ‘don’t do such a wicked thing. Look-I have two virgin daughters. Do with them as you wish, but leave these men alone, for they are under my protection.’ ‘Stand back!’ they shouted. ‘Who do you think you are? We let you settle among us, and now you are trying to tell us what to do! We’ll treat you far worse than those other men!’ And they lunged at Lot and began breaking down the door.”

Genesis 19:1-29
My God! These Sodomites were really obsessed, drunk with this homosexuality. Imagine, they rejected those young, beautiful virgins, attacked lot, and started breaking down his doors. They even threatened to treat him far worse than the male visitors. Jesus! And this could mean also sexually assaulting Lot! True. They refused anything standing on their way to satisfy this strange, unnatural lust. Now, can this obsession be compared with the zeal with which the Western countries and their leaders are propagating this practice?

Presently, these leaders, especially the current president of the United States of American do not visit any nation or attend to other visiting leaders without preaching ‘gay right’. They and the global organizations that they help fund have made this a policy. In fact, they do everything including bullying other nations into legalizing this deviant sexual preference in the name of gay rights.

This is that same Sodomite spirit. That spirit behind the Sodomite men’s obsession to have sex with other men at all cost! This is the earliest record of homosexuality in the bible. The people of Sodom were not only deep in immorality, but were also involved in economic crimes, blasphemy and bloodshed. Now let’s move on.

After, this time, there have also been homosexual practices in different generations. From the Ancient Egypt, Ancient Rome, Ancient Greece, through medieval, renaissance and modern history. It has been a struggle between nature and perversion, between morality and depravity, between commonsense and infinite lust.

Same-sex has been a practice among the heathen and the idolatrous. It is a heathen practice. But I don’t want to bore you with the historically transmission of this practice since this is not a history work. Though, we will comment more on this later when we will be talking about its relationship with occultism.

The most important thing for you to know is that today, there is a sudden renewed, reinvigorated effort to propagate, legitimize and globalize the acceptability of this deviant sexual behavior. And we all, those that are still sane, must stand up and protect our humanity, our society, our health, family, marriage and our children from these predators.

It is also imperative to know why this is happening at this time and to properly situate this resurgence. This is the last days. True. The prophecy of the end time is coming to pass. We were clearly told that at the last days the iniquity will escalate and that men shall be consumed with the lust of the flesh, pleasure and vanity. But, we must refuse this practice that will automatically place us below animals and also attract irreversible divine judgment upon humanity.

Today, acceptance of homosexuality is highest in Europe, Americas and Australia while it is lowest in Asia and Africa. Now, these are the same Westerners that brought civilization and light to the rest of the world. They now tell us that a man can marry a fellow man, a woman a fellow woman, and they even go ahead sleep with animals – bestiality. Yes, you heard me well. And for your information, after now, these perverts will also lead campaigns for man to marry animals. Are you not already seeing the handwriting on the wall? Today, they are doing it in the secret, but soon they will be able to legally, openly marry and have sex with their dogs, pigs, cows, horses, etc. Is it not a matter of ‘love’, right and choice?

The bakers and the official should start getting ready to bake wedding cakes and issuing marriage licenses to our dear future brides - pigs, dog and their human partners as soon as the courts legalize same. After living and spreading the light, they are now returning to irreversible darkness! What a paradox!!! Watch out for the next part of this article next week.