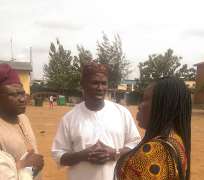 Diezani Madueke, Nigeria’s former oil minister is the person the entire watchers in the oil industry including the international community, government officials, oil magnets and friends of Jonathan believe as the super minister that stole Nigeria’s $6.2 billion dollars as revealed by Adams Oshiomhole, Edo State Governor.

President Buhari of Nigeria had traveled to the US two weeks ago and during his meeting with President Obama and other State Department officials in Washington, was given a list of oil thieves who stole the nation blind under the presidency of Goodluck Jonathan.

Governor Adams Oshiomhole of Edo State who was part of President Buhari’s delegation, giving a hint of what the list contains said that, “The PDP destroyed the country. I mean from the lips of American officials; senior officials of the State Department said one minister under PDP cornered as much as $6billion…“The man said even by Washington standard, which is earth-quaking”

Another prominent Nigerian and wife of late MKO Abiolaa, who, like me, is also conversant with certain facts about the oil industry and happenings around the diplomatic community, challenged the figures and claimed that the amount the unnamed Jonathan’s minister stole is $9.3 billion dollars. According to Queen Zainab Duke-Abiola, the Akasoba of Kalabari land in the Niger Delta, she had evidence from the White House that a former Petroleum Minister stole $9.3 billion.

Duke Abiola, said that: “According to the information available to us, the minister stole more than $9 billion; not Australian dollars, but US dollars.”

“And what I am saying is that the money should be used to develop the Niger Delta. Use this to help the impoverished Niger Deltans,” she added.

I do not want to go into the controversy of whether it is $6 billion dollars or $9.3 billion dollars, but all I know is that from information available to me, the figure of Duke Abiola, who also hails from the Niger Delta, is nearer to what insiders believe Sweet Diezani cornered from the national treasury. Diezani has become a butt of joke among diplomatic circles worldwide at how a pretty African woman can loot and impoverish her people, including fellow women.

Diezani Madueke, is a woman who has so much power around the Presidency of Jonathan that if she had listened to simple advice, including the ones I gave publicly, she would have turned Nigeria on the path of greatness. I closely monitored the level of power this woman wielded, such that she became a source of constant quarrel between the President and his wife Patience. This woman simply had the First Lady in derision and all attempts by Patience to make her husband see Diezani as Jezebel failed till weeks before the rescheduled Presidential elections.

Nigerians must know that that it was Diezani Maduke that brought down the Jonathan Government, giving credence to the alleged warning the First Lady had given the then President. US officials had always pointed out to Jonathan the level of corruption existing in the system and how they are being committed by his friend and cronies. They have always pointed in the direction of Diezani as one person whose level of loot is actually earth shaking, even by US standards. There were even attempts to convince Jonathan to sack her quietly, but the later was too weak to take any step against the pretty lady, until her greed swallowed his presidency.

It was a sober and regretful Jonathan, after conceding defeat to Buhari, was in no mood to see Diezani, and when she was bent on bursting in on the former, was shouted out of his office. Jonathan’s eyes opened too late. He was already on his way to Otuoke .

Nigerians must know that it was the US and UK pressures that made it possible for Buhari to be president of Nigeria. They quietly eased Jonathan away, and I got wind of such grand plot. They cited levels of corruption unseen in the history of Nigeria, and pointed also at Jonathan’s insistence on retaining a most corrupt woman as Oil Minister.

Diezani greedily put hand in every oil deal. In a piece I published earlier in April 2012 titled ‘Injustice! How Babangida, Abacha, Obasanjo shared Nigeria’s Oil Blocks’ and another one in February 2015 titled ‘30 Facts about Owners of Nigeria’s Richest Oil Blocks in the Midst of National Poverty’ I stated concerning Diezani that “in April 2011 Mike Adenuga attempted to buy Shell’s OML 30 for $1.2 billion dollars. The Minister for Petroleum and Nigeria’s most powerful woman refused the sale of the OML30 to Adenuga citing national interest. This block was later sold to Heritage Oil for $800 million dollars eleven months later”.

In this deal, Nigeria was shortchanged of a whopping $400 million dollars (N80 billion naira). Everybody fingered Diezani Madueke’s influence for the open theft which favored Shoreline Energy, the local partner to the deal. Since she tasted the forbidden apple, she cut deals off all oil blocks till the last one done two months to the end of the Jonathan administration.

Her last deal two months to end of Jonathan’s regime, involved the transfer of operator-ship of another of the country’s most valued oil fields, OML 42, with capacity of estimated 700 million barrels, from NPDC, subsidiary of NNPC, to Neconde Energy Ltd.

The irrationality behind the transfer caused Nigeria’s oil workers under National Union of Petroleum and Natural Gas Workers (NUPENG) and Petroleum and Gas Senior Staff Association (PENGASSAN) to down tools paralyzing economic activates all over Nigeria in March, 2015. As usual the presidency told Nigerians that it was the opposition party that is sabotaging it. The oil workers, having watched how OML 30 was sold in 2011, plus subsequent others, decided to protest the last one.

Nigeria was losing about 250,000 barrels of oil to oil thieves daily and the Group Managing Director of Nigerian National Petroleum Corporation (NNPC), Mr Yakubu at the Oil and Gas Conference in Abuja in March 2014, put the crude oil theft for 2013 alone at $11 billion dollars.

While this theft is ongoing, another theft involving deliberate sale of millions of barrels of Nigeria’s crude was ongoing, without recourse to any procedure. This is advanced official oil theft. This one goes through what looks like official channel but usually the quantity is in batches of 1 or 2 million barrels. This is the type of deal President Buhari said that one minister was selling 1 million barrels of oil daily and putting the money into private account.

They sold many hundreds of batches of 1 and 2 million barrels over a period of 5 years, netting between $ 100 and $ 200 million dollars per deal. For estimated 100 such deals, it amounts to $20 billion dollars stolen, sold, pocketed without recourse to Federation Account. Was Diezani unaware of this too.

In another widely circulated piece ‘Stolen! $142 billion dollars Nigeria’s Oil Revenue in 5 years, in the Midst of National Poverty, Additional Financial Mathematics’ I have stated that “Total probable missing/ stolen or unremitted Oil funds in 60 months(of Jonathan’s regime) = 142.2 billion dollars” and I tabulated how I arrived at the figures accordingly. Coincidentally, President Buhari told journalists in the US last month that Nigeria is looking for $150 billion dollars stolen in ten years. Therefore, we are at the same page.

Diezani Madueke led the greatest financial rape on Nigeria. I asked a PDP chieftain what they are doing with all the looting in the oil industry and he told me that they are preparing for 2015 presidential elections. This conversation was late January 2014.thirteen months to the elections. However, I had the feeling, with the level of looting, that probably there is attempt to plunder the nation ahead of possible breakup..

My counter-check with the various militant camps and leaderships, including NDPVF,MASSOB,OPC, and other groups did not suggest any high scale preparation associated with plot to break up and balkanize Nigeria. I resolved that this is pure greed. I raised alarm in certain places and happily elements within the international community heard, a topic scheduled for another day. I thank Nigeria’s online media community for invaluable cooperation whenever I raise such alarms, and players within NNPC and CBN whose information are valuable.

$6 billion dollars in the hands of one Jonathan’s Minister can build twelve (12no’s) of 2nd Niger Bridge at the cost of $500 million dollars (N100 Billion naira) each and silly Igbo leaders will not have to fall down and beg any Jonathan to give the South East an overpriced PPP Bridge, as though the money being looted by one “Sweet Babe’ cannot give us one.

$6 billion dollars can build 12 brand new six lane Enugu-Port Harcourt Expressway or 18 brand new Enugu-Onitsha Expressways and the average of twenty Igbo and Niger Delta blood spilled weekly on those roads due to accidents associated with poor state , will not occur.

$6 billion dollars can create 2 million jobs in Nigeria if prudently managed, and by means of economic viral effect, take 10 million people out of poverty line, and one Jonathan’s minister diverted it and somebody is playing ethnic and religious card. Nonsense!

$6 billion dollars is part of the $142 billion dollars answered prayer from God to the Nigerian masses, including my church members , disciples, and followers and some silly things , powered by the Queen of the Coast, stole it, using it to fly private jets, buy perfumes, Victoria Secrets, Mary Kay Products and properties overseas. I do not want to talk more, but I want the oil looters to know that many Nigerians know where they hid their money.

Sweet Diezani and her co travelers drawn from all tribes and religions, who connived to steal various sums from oil theft ranging from $6 billion dollars and accumulating to over $142 billion dollars should stop using part of the loot to lobby some prominent northerners for soft landing, they should return our money quietly and publicly before the Thunder of God will Fire them to non-existence for lending hand to the devil in destroying Nigeria.