JONATHAN STEPS OUT, PAYS FOUR-DAY VISIT TO US 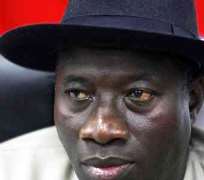 Jonathan is billed to attend an international nuclear summit on the invitation of President Barack Obama.

This was disclosed in a statement made available to State House correspondents on Friday by the Senior Special Assistant to the Acting President on Media and Publicity, Mr. Ima Niboro.

It is the first time Jonathan will travel outside the country since he became the Acting President on February 9, 2010, but the statement did not state if the Senate President would take charge of the government in his absence.

Niboro, however, explained that senior officials of the executive arm of government would be on ground during Jonathan's visit to the US.

The Acting President is expected to meet Obama during the working visit, the statement added.

'He is expected to meet US President, Barack Obama, on Sunday, 11th April, for a one-on-one meeting.

'He is also expected to meet with US Vice President, Joe Biden, the US Congressional Black Caucus, as well as the President of the World Bank.

'The summit itself is expected to focus on the control of vulnerable nuclear material across the globe, and to ensure that such material do not fall into the hands of non state actors.

'The summit is also part of the global effort to attain higher levels of nuclear security, which is essential for peaceful development and the global expansion of nuclear energy to nations such as Nigeria.

'Senior officials of the executive branch, including the Secretary to the Government of the Federation, the National Security Adviser and the Principal Secretary to the Acting President would be fully on ground during the period.'

Empowered Newswire reports that at the end of the summit on Tuesday afternoon, Obama will address a press conference detailing the communique of the summit.

The United Nations Organisation, the International Atomic Energy Agency and the European Union will also be represented at the meeting.