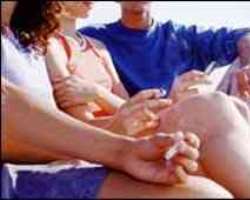 Young people are responsible for two thirds of chlamydia cases

Women should be tested for chlamydia every time they have a new sexual partner to cut their chances of pelvic disease, UK researchers say.

A study of 2,500 students found that annual screening is not enough to prevent cases of pelvic inflammatory disease, which can cause infertility.

In those who were found to have chlamydia, treatment cut the risk of pelvic disease by 80%.

The researchers from St George's, University of London, concluded that most cases of pelvic inflammatory disease were in women who did not have chlamydia when they were tested a year earlier.

The findings, published in the British Medical Journal, suggested they may have become infected in the 12 months after screening.

Chlamydia is the most common sexually transmitted disease in the UK and the number of cases is steadily rising.

Checks
The researchers recruited sexually active female students between the ages of 16 to 27 from 20 universities and colleges in London.

They were swabbed at the beginning of the study and tested for pelvic inflammatory disease, which as well as infertility can cause chronic pain and increase the risk of ectopic pregnancy, a year later.

Study leader Professor Pippa Oakeshott
The researchers found that most cases of pelvic inflammatory disease occurred in women who tested negative for chlamydia when they were initially tested.

Study leader Professor Pippa Oakeshott, who also works as a GP, said: “The crucial message is that individuals should get tested every time they have a new sexual partner.”

But she added that chlamydia was not the only cause of pelvic inflammatory disease.

“It's probably several bacteria that cause it, and we should probably be screening for other things, but chlamydia and gonorrhoea is a good start.”

She also said testing needed to be more accessible to young people, with kits being given out in colleges and youth clubs.

A spokesman for the Health Protection Agency said the findings reinforced the testing policy of the National Chlamydia Screening Programme, which was launched in 2003.

“The study, looking at a single annual test, shows the importance of the programme's approach to testing annually or on change of sexual partner because most cases of pelvic inflammatory disease occurred in women who initially tested negative for chlamydia.”

Last year the National Audit Office criticised the screening programme for duplicating effort and failing to test as many of the under-25 target group in England as it should have.