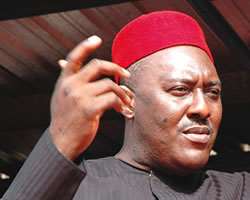 The Peoples Democratic Party (PDP) on Tuesday asked President Muhammadu Buhari to live up to his electoral promises and stop offering excuses.

PDP National Publicity Secretary, Chief Olisa Metuh, stated this in a statement in Abuja, adding that his party noted with dismay, President Buhari's statement on Monday that Nigerians should not expect much from his first 100 days in office on claims that he met 'virtually an empty treasury and huge debts,' noting that such only underlines the fact that the present administration is really not equipped to face the challenges of governance.

'While we restate our resolve to engage only in credible and issue-based opposition, we want the President and the APC to note that their plea for patience from Nigerians does not arise, because ab initio, there has not been any indication that they are actually serious and determined to deliver on their campaign promises upon which they rode to power.

'Of course, Nigerians are willing to support and cooperate with the President, but we are worried that the pictures emerging from his presidency and his party do not in any way inspire hope in the citizenry, especially as they have continued to show that theirs is ostensibly a matter of obtaining power by false pretenses.

'President Buhari and the APC must know that Nigerians did not give them the mandate to engage in frivolous excuses and pleas but to hit the ground running with solutions and quick fixes they promised during the campaigns,' he stated.

Metuh said the statement by the President could be an admission of his poor knowledge of national and international economics affairs.

He also asks if such statement underscores the lack of 'capacity and skills by the administration to effectively harness and galvanize resources and potentials inherent in Nigeria, which has already been nurtured as Africa's largest economy and one of the fasted growing in the world.

'Even if Nigerians decide to wait endlessly, we wonder how much the President can achieve amidst the flip-flops from his presidency and cacophony of interests from his party leaders struggling to enlarge their selfish political and economic frontiers.

'How can one reconcile President Buhari's statement with the recent ridiculous and misleading claim by APC's National Publicity Secretary, Alhaji Lai Mohammed, that this administration has achieved in three weeks what the immediate past administration did not achieve in five years?'

Metuh added that after the election victory, the APC and the President have continued to expose their lack of commitment towards their campaign promises.

He recalled that on May 5, 2015 , President Buhari, at a meeting with APC leaders in Abuja, opened the floodgates of excuses when he expressed his nervousness to deliver in office, adducing that 'Rome was not built in a day.