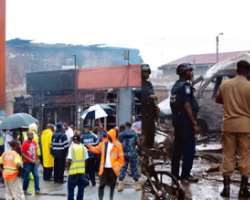 No fewer than 150 lives were lost in Accra, capital of Ghana, after a petrol station went up in flames.

People were said to have sought shelter in a filling station because of a downpour when the tragedy struck. It was learnt that the explosion resulted from the flood that swept stored fuel into a nearby fire.

Spokesman for Ghana Fire Service, Billy Anaglate, had told the BBC that 'at least 96 people have died in a fire at a petrol station in Ghana's capital, Accra. The flooding helped cause the fire.'

However, as of 9.30pm on Thursday, Sky News reported that the death toll had increased to 150.

It was gathered that rescue efforts were being hindered by the high volume of flood which had displaced many. There were also fears that the number of dead could rise as the search of the site continues.

A bus conductor, who survived the inferno, Yaw Aforve, told the BBC that he was sleeping in his car at the petrol station when he heard the fire. He said he jumped into the floodwaters and when he came up for air, the fire burnt his face.

'I was swept away by the water to the other side [of the road]. 'I saw so many people screaming and shouting,' he said.

The waters 'caused the diesel and petrol to flow away from the gas station, and fire from a nearby house led to the explosion', Anaglate said, the Associated Press news agency reports.

Anaglate told Sky News that a final figure had yet to be arrived at as rescue was still ongoing.

'We are still trying to salvage the site of the accident before we can come out with an accurate figure,' he said.

Local hospitals said morgues were full, with the death toll likely to rise, according to security officials.

President Dramani Mahama toured the scene, describing the loss of life as 'catastrophic and almost unprecedented.' He said a lot of people had lost their lives, adding that 'he was short of words.'