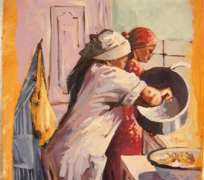 In many households today,there are young girls employed as housemaids while some are teenagers, some in their 20s, some are even as young as 10 years old. However, while some women treat them well, some maltreat them and more often than not, the husbands sympathise with them by reprimanding their wives.

The constant harassment or abuse from the wife towards the maid can ignite sympathy from the husband towards the maid, because this is something he sees all the time and can generate a soft spot for her .And while the wives may take sympathy and reprimands lightly, if the maid in question is 10-years old or so, it can precipitate discord in the family if the maid is a fully developed teenager or is in her early teens. The wife may accuse the husband of developing interest in the housemaid and some housemaids may also capitalise on the man's sympathy and disobey the wife. In this situation, it only takes the grace of a true righteous person to control his emotion so as not to commit anything outside his religion or what he and his wife share which boils down to love .

It is not out of place to give to the needy, show them that you care for them, love them as if they are your own. It makes them work for you without any fear or favour, but when you decide to be difficult or wicked to them, there will always be a problem in one way or the other.

We spoke to a marriage counsellor, from Living Church Suleja, Mrs. Kemi Magbadelo, who said that husbands should not sympathise with the housemaid, instead, they should hear from both sides, that is, the wife and the maid, as it would enable them have a balanced story.

“When the wife maltreats the housemaid, my advice is that the husband should call the wife and talk to her properly, but if such attitude continues, he should allow the maid to leave the house because she can cause a problem in the home. This is because when there is constant quarrels between the wife and the maid, it will be better to save the marriage and allow the maid to go away.

“They can decide to get a male or a house help that can come and go home that same day. I prefer the house help because they are better and some of these maids are demonic,”she said.

A sociologist from the Kogi State University, Thomas Imoubu Gomment, said that the possible reasons why husbands sympathize with the maid , “include pity, passion, emotions, affection and dehumanization. It is an abuse. It is morally and religiously wrong. It is barbaric. It creates an inferiority complex in the abused house girls. It makes them hardened, deviant as a result of stigmatization from their mistress. It kills their initiatives and makes them retarded. On a general note, it is a family related crime according to criminologists,”he said.

Malam Ibrahim, an Abuja resident said he does know why women, as mothers, maltreat housemaids, instead of treating them like their own children or sisters, adding that this has been a source of quarrels between him and his wife.

“Normally, my wife is not a hard hearted person, but surprisingly, she is very harsh to house girls. She shouts at them, and then one day, I saw her slap one house girl who is about 14 years old. I was angry and talked to her against that. And became angry, accusing me of wanting to marry the girl and sent her away. I call on women to see these housemaids as a trust. If a girl isn't behaving the way you want, instead of you to maltreat her, just send her away,” he said.

Another incident that happened in Kaduna was that the affected woman( names withheld) had to be hospitalized for two weeks after her husband got married to her younger sister's housemaid. The housemaid was also maltreated and even beaten by the grown up children in the house for the slightest mistakes. She was treated like a slave.

The man who was then a senior customs officer, was based in Lagos with his wife. He got to know the housemaid through his wife's younger sister( names withheld). Explaining to us how it happened, the lady whose housemaid married her older sister's husband said: “ It all started when I sent my housemaid ,Rabi to help my sister do some house chores whenever they are in Kaduna. Unknown to me, my sister's husband had seen the village girl and even developed interest in her. It got to a peak, when Rabi told me that she was going back to her vllage in Katsina”, she said.

“About three months later, we were shocked to realize that my sister's husband was getting married, not to anybody but Rabi, my former housemaid. It was a terrible experience. My housemaid became my sister's mate. My sister spent over two weeks in hospital because of that incident,” she said.

Hajiya Amina, a housewife, said though she didn't maltreat her housemaid, but she felt that some women do so to control the housemaid.

“Actually, such women see them as slaves because they are domestic servants. They expect them to be perfect and be at their beck and call. A simple accident of breaking a mug will make some women deduct the money of the mug from the maid's salary. And I think the husbands sympathise with the housemaids because men are less wicked towards children than women, which is unfortunate, since women are supposed to be kind hearted as mothers ,”she added.

Charity,a housegirl in Gwarinpa, Abuja, said she spent a year in Lagos where she was maltreated. The woman will beat her and some of the delicacies she cooked would not be given to her.

According to her, she was overwhelmed when her new employer gave her everything they ate and did not abuse or beat her. “They are good people,” she said.