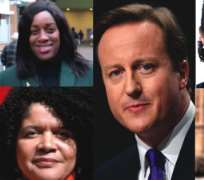 In one of the most keenly contested general elections in British history, four Nigerians won seats to the revered parliament, making it the first time such feat would be recorded

Against all odds, David Cameron has won his re-election bid in one of the fiercest polls in British history.

Cameron, Prime Minister of Britain, led the Conservatives to almost a landslide victory against the Labour Party - a development that forced arch-rival - Ed Miliband to step down as head of the opposition.

With the victory, Cameron returns to the iconic Number 10 Downing Street, the official residence of British Prime Ministers to continue with his work of massive reforms and making Britain greater.

But it is not only Cameron that has been left smiling following the announcement of winners - four politicians of Nigerian descent also tasted victory during the general elections in the Queen's land.

Before Thursday's keenly contested polls in Britain, not many within and outside it were familiar with Chuka Umunna, Helen Grant, Chi Onwurah and Kate Osamor. But by mid-day Friday, the four have almost become celebrities of sort after an elaborate media focus on them.

The four Nigerians won seats into the British parliament, making it the first time such would be happening in the highly conservative United Kingdom. While Umunna, a Labour Party politician who has served Streatham as Member of Parliament since 2010 and has enjoyed a meteoric political rise in recent years is a relatively known face outside Britain, the profile of the other three was largely unknown until Friday, a day after the keenly contested elections, even though Grant and Onwurah had been Members of Parliament over the last five years.

Umunna
Born on October 17, 1978 to a Nigerian father - Bennett and British mother - Patricia, Umunna began his education at Hitherfield Primary School in Streatham, South London, and the Christ Church Primary School in Brixton Hill. He later moved to St. Dunstan's College, Catford, Southeast London where he played the cello and became a respected prefect in the school.

Pursuing higher education, the eloquent Umunna bagged an upper second class in English and French Law from the University of Manchester before going to study for one term at the University of Burgundy in Dijon, France. He would later pick up an MA at the Nottingham Law School.

Umunna did not just get to the top all of a sudden - he slowly but vigorously climbed his way to the centerpiece of British politics. In 2002, after graduating from the university, the 37-year-old began working as a solicitor for Herbert Smith, a law firm based in the heart of London. Four years later he joined Rochman Landau, specialising in Employment Law.

However, he soon began writing and providing commentary on the Labour Party, as well as broader social and economic issues, usually in his capacity as a member of the Management Committee of the Labour-aligned Compass pressure group. He also wrote articles for the Financial Times, Tribune, The Voice, The Guardian and the New Statesman, and began to appear on various radio and television programmes as a commentator. Umunna would later go on to establish and edited an online political magazine, The Multicultural Politic.

In early April 2013, his law firm was linked to favourable updates made on his Wikipedia page in 2007, which included a reference to him being tipped as the 'British Barack Obama'. Earlier in June 2010, he was elected a member of the Treasury Select Committee while in October of that year, he was appointed to serve as a Parliamentary Private Secretary and, in May 2011 rose to the position of Shadow Minister for Small Business and Enterprise until his promotion to the Shadow Cabinet.

Grant
Grant, born on September 28, 1961, is a Conservative Party politician and solicitor who was first elected into the British parliament in 2010. By that feat, she became the first black woman to be selected to defend a Tory seat and the Conservatives' first female black parliamentarian. She has served as Minister for Sport, Tourism and Equalities.

In September 2012, Grant received her first government appointment when she earned the dual roles of Under-Secretary of State for Justice and Under-Secretary for Women and Equalities. She was born in Willesden, North London to an English mother and Nigerian father but grew up with her mother's family after her parents separated. She lived with her mother, grandmother and great-grandmother.

Onwurah
Onwurah, born on April 12, 1965, is a Labour Party politician, who was elected at the 2010 general election as the Member of Parliament for Newcastle upon Tyne Central. Onwurah is Newcastle's first black MP.

During the depression of the 1930s, her maternal grandfather was a sheet metal worker in Tyneside shipyards. Her mother grew up in poverty in Garth Heads on Newcastle's quayside. Her father, from Nigeria, was working as a dentist while he studied at Newcastle Medical School when they met and married in the 1950s.

After Chi's arrival in 1965, her family moved to Anambra State when she was still a baby, only two years before the Nigerian Civil War. The situation forced her mother to take the children back to England while her father stayed back to fight for the Biafran army. She had been a strong voice in the parliament and her victory this time around only goes to confirm her rising reputation in British politics.

Osamor
Osamor, a National Health Service manager, would be representing Edmonton constituency in London on the platform of the Labour Party. A respected trade union activist and women's charity trustee, she made funding the NHS and standing up to government cuts the main theme of her campaign.

Emerging one of the Labour Party's shining lights during a generally poor election outing, Osamor was declared winner in the North London seat with 25,388 votes. Her closest rival, Gonul Daniels of the Conservative Party ended up with 9,969 votes, making it an overwhelming victory for her.

The triumph of the four parliamentarians is seen as a major boost to Nigeria's international image especially at a time when leadership has also changed hands at the centre in the oil-rich country. The victory is also viewed as cheering news for Nigerians resident in the United Kingdom who are often the subject of racism and segregation in the highly conservative region. Agency report