Buhari’s Victory, False Prophecies and Raging of the Heathens 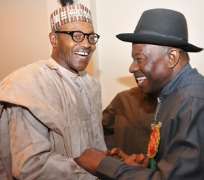 Lots of stomach infrastructure prophets in Nigeria predicted the victory of Jonathan at the just concluded presidential polls in Nigeria, describing Buhari's supporters as heathens raging against the Lords Anointed. I am yet to see any of them that predicted a Buhari victory. Mcheeew!

These misguided spokespersons of God gave us lectures of how Jonathan is the David that will defeat Goliath of the Philistines (Buhari). In all the meetings of clerics I attended around Abuja, Enugu, Lagos, Port Harcourt and environs, I hear the same tale of how God told some pastors that a Buhari presidency will Islamize Nigeria and how God intends his people to pray out this heathen who wants to return them ( not myself) back to Egypt. We were also told that God will give Jonathan a second term victory because he has not finished his assignment.

I never discerned all these things prophetically and I know that these statements are not from the Spirit of God. In one of the meeting of a closed group of ministers in Abuja, I blurted out angrily at one of the prophetic tale bearer asking 'does God intend to keep a most corrupt president, are you aware that the economy is in so much bad shape that there may be no money to pay salaries by the end of this year if leakages in the system is not drastically cut. Are you aware that many State Governments having huge debt profile, endangering the economic status of their states? Which parameter is your God using to declare Jonathan a savior despite grinding poverty in the land..'

The most ridiculous of all I heard was that Buhari, Tinubu and the APC represents the heathens that have ganged up against God. These stories were fed to the congregation of many, and they wasted precious times of prayer on something I knew would be a waste. Some organized special prayer session, special night vigils, special crusades, after collecting their own share of the corrupt national cake in thousands, millions and billions of naira, and gathered people to pray in churches, open spaces and fields all in an effort to deliver Nigeria from the hand of heathens. In one of the cities where such money for hand prayers was made, I told some Archbishops and Bishops to ensure that they collected their own share of the Jonathanian largesse before enlisting their congregants for the prayers. The Bishops heeded my call and lied in wait for the principal prayer warrior, who on sensing trouble, skipped the planned pre-crusade ministers' briefings and left immediately after his crusade.

Of course, God and Jesus Christ disappointed them all. I believe that Tinubu, Amechi, Oshiomhole , Fashola and their group, though having their own shortcomings, cannot in the prevailing context, be branded as heathens because the are supporting Buhari. It is spiritually discernible that the real heathen is the incumbent Goodluck Jonathan.

This man who had no shoes, allowed so much corruption within his five year tenure that from my own estimate, a total of $142 billion dollars oil revenue were stolen in five years. I have buttressed it in earlier write-up 'Looters of $142 billion dollars oil revenue not working for Jesus Christ'. A heathen is that president so heartless to allow such theft by close friends and cronies while the over 60 million Nigerians live below$1 dollars daily. Former CBN Governor Prof Chukwuma Soludo put his own estimated off budget theft at N30 trillion naira ($150billin dollars), this stolen or missing sum can construct two hundred and forty eight numbers of (248) Second Niger Bridge at the cost of $500 million dollars each , and a prayer warrior is still looking for a heathen.

A heathen is that President who cannot expose the Boko Haram sponsors who are part of his ruling party, his cabinet ministers and his service chiefs and deliberately deceives Nigerians that opposition flagbearer is supporting Boko Haram. A heathen is that man ignored the earlier warnings of ex Heads of States Muhammadu Buhari and Olusegun Obasanjo in 2011, immediately after the United Nations Abuja bombings, that he should pursue and prosecute the sponsors of Boko Haram before they become too uncontrollable, until over 10,000 lives have been lost.

A heathen is that president who abandoned Northern Christians to Boko Haram onslaught until six weeks to the rescheduled presidential polls. A heathen is that president who left Christian communities with over 100 years Jesus heritage like Chibok, Gwoza, Askira,Uba,Damboa and numerous others to be the first to fall into the hands of the Jihadists. I enumerated them in the piece released mid last year titled 'Boko Haram Republic of Gwoza: Jonathan abandons Northern Christians'

Heathen is that President under whose tenure I lost many missionary colleagues to the hands of the insurgents while great feasting is going on in Aso Rock.

Heathen is that president who said that 16 are greater than 19 in the Nigerian Governors Forum controversial elections, and set the stage for Governors Amechi, Kwakwanso, Oshiomhole and co to give the opposition the boost they deserved. Had these governors remained in the PDP, a Buhari victory would not have been possible.

Jesus Christ disappointed all these prophets because they allowed their sentiments and emotions to becloud the voice of the Holy Spirit. Many of them clamored friendship with a sitting President more than hearing the Voice of God and siding with the people. I was also tempted like them with advances from certain quarters to toe the line of Balaam, and I rebuffed it, not because I am a money bag, but because the Holy Spirit rejected their gifts.

Heathen is also that prophet who allowed personal friendship with Jonathan to obscure the voice of God and conscience which states that Nigeria is dying slowly due to corruption, impunity and insecurity.

Heathen is that prophet who in private cannot diplomatically tell the incumbent that Nigerians are complaining about his style of governance, because saying such may lead to loss of billions or hundreds of millions of tithes, offerings, seed and prayer money.

A church goer who patronizes witches and wizads, Guru Maharaji, Olumba Olumba, Ogboni, Amorc. Free Mason and such secret organizations whose operations are anti-Christ is also a heathen, whether the person sows seed of billions of naira to a pastor or not.

Jesus Christ have enjoined his followers in Matthew 5 vs 16 to 'let their lives so shine among men, that they may see your good works, and glorify the name of your father in heaven'. Did their incumbent President meet that Criterion?

The good news is that the heathen President has repented after his defeat. He is now shunning all the corrupt people he infested himself with for five years, including his Oil Minister, Diezani Madueke. He has barred those who misled him on a hate campaign, from coming near him now. He has decided to be his usual self, cooperating with the next regime. Having read the security reports from the DMI, NIA, DSS and some more objective analysis from the CIA that any attempt to manipulate the election definitely lead to unimaginable violence whose outcome may not be predicted, and the threat by the world powers to drag him to ICC if Nigeria ends in violence and break-up, he decided to concede defeat. Though his repentance came after Buhari's victory, he can now be classified as having transmuted from heathen to Christian, stilling the raging of the heathens.