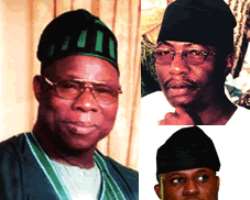 Never in the history of Ogun State had nomination of any Minister generated so much furore as in the case of Senator Jubril Martins-Kuye and a relatively unknown Nojeem Alao Awodele. Surprisingly, Kuye, one of the new nominees was a former Minister of state for finance.

It is stating the obvious that the nomination has further polarized the 'Gateway state' and particularly the state chapter of the Peoples Democratic Party (PDP), which in recent time has been mired in crisis.

However, the controversy trailing the nomination is expected considering the fact that it is coming ahead of 2011 general elections in the state. For political watchers, the emergence of Martins-Kuye and Awodele may have just revealed signs of what to expect next year when the state would go to the poll.

After the announcement of the nominees, Petitions and counter-petitions as well as public protest trailed the exercise as interest groups either support or slam the development.

The exercise has all the trappings of intrigues and as a political analyst said, it points to the shape of politiics and horse-trading in Ogun between now and 2011. In the estimation of many, neither Martins-Kuye nor Awodele's nomination was facilitated by Governor Gbenga Daniel. They are said to have come from former President Olusegun Obasanjo and the Speaker of the House of Representatives, Dimeji Bankole respectively. Awodele is the personal assistant to Chief Alani Bankole, Dimeji's father, while Martins-Kuye is the leader of another faction, PDP Elders Council in Ogun PDP.

Understandably, their emergence immediately raised dust as a pro-Yewa/Awori group on Monday stormed the ancient city of Abeokuta with thousands of protesters lamenting the appointment of JMK and Awodele as nominees from the state. Addressing the protesters at the Oke-Igbein governor's office, Ogun state governor, Gbenga Daniel, said that some handful of politicians in the state are playing bad politics because of their selfish interests.

'Ogun is a peaceful and united state. If not for the bad politics some people are playing, we should not have come to this state. They are playing selfish politics. Despite their hues and cries about the state, people still come to tell us that this is a well governed state, preferred by investors'', he said.

The protesters had a peaceful procession started from Ita-Oshin, through Ita-Eko, Ibara roundabout and Oke-Ilewo and terminated at the governor's office, Oke-Mosan, lamenting the marginalization of people of Ogun West Senatorial District from the nomination. They carried various placards bearing different inscriptions like 'Ogun West rejects the ministerial nominees for Ogun State'. 'We demand a minister from Ogun West', 'Ogun West says no to further margnilation'. 'Jonathan, do justice to Ogun West'. 'In 7 years, there have been seven Ministers from Ogun State with none from Ogun West'.

Daniel told the protesters, 'I want you to note something that our Acting President is a good man. He is a humble person. One thing that I think we should all do is to pray very well so that who misled people would not mislead him.'' The governor also attempted to disabuse the minds of the Ogun West Senatorial District that other people from both Ogun East and Ogun Central Districts were against them.

''There is nobody from Egba and Ijebu who does not like Yewa people, but there are few misleading set of people who are acting for their own selfish interests'. Senator Ayo Otegbola, the Asiwaju of Aworiland, while addressing the protesters accused someone he described as 'our father' who is currently not at home. He urged the Acting President to address what he described as injustice in the state, adding that the current nominees from the state were not true representation of the people of the state.

But Deputy Speaker in the state House of Assembly, Pastor Remmy Hazzan, slammed the protest saying the opposition against Martins-Kuye's nomination was not the stand of the entire PDP in the state. Hazzan, who was reacting to reports that the state chapter of the PDP had registered its disapproval of Kuye's nomination, insisted that this was not the stand of the party, but that of 'a few clique in the party'' Hazzan pointedly accused Daniel of masterminding the campaign against the nomination of Kuye, and Alao, adding that the governor was fond of stirring up trouble when his request fail to snail through.

According to the Deputy Speaker, the initial list forwarded to the Presidency by Daniel did not contain the name of any one from Ogun West adding that the inclusion of Chief Matilda Iyabode Apampa was an 'after thought''.

According to him, 'This idea of people whipping up sentiments should be discouraged. All this opposition is the handiwork of the governor, who does not want to lose anything. Anything he loses, he wants to destroy. The list he initially forwarded to the Acting President had the names of Chief Kola Onadipe (incumbent Commissioner for Water Resources and Rural Development), Dr. Femi Majekodunmi (brother to his Chief of Staff) and Mrs. Lola Abiola-Edewor (MKO Abiola's daughter). Are these people from Ogun West?', he asked rhetorically.

'It was after the governor saw the futility of this list that he withdrew it and added Apampa. The position of the party as published in the newspapers does not represent the position of the generality of PDP members; it is just the view of those acting the script of Mr. Governor''. Hazzan challenged those criticizing the appointment to subject the issue to a popular referendum within the party in the state, and wondered why someone would object to the nomination of Martins-Kuye despite his invaluable contributions to the party both at the state and at the national level.

But the State Secretary of the party, Akogun 'Pegba Otemolu, in a petition to the National Chairman of the party, Prince Vincent Ogbulafor, disowned the two nominees. He urged the national secretariat to use its good office to prevail on the Acting President to drop the two nominees in the interest of peace, fairness and equity. Quoting Sections 147(5) and 65(2b) of the 1999 Constitution, he said that the two people are not qualified to be ministers. He listed Chief (Mrs) Iyabo Apampa-Ogun West, Professor Olukayode Oyesiku-Ogun Central and Akogun Kola Onadipe- from the Ogun East Senatorial District as the Ministerial nominees forwarded to the Presidency by the ruling party from the state.

He added, 'Sir, it is no longer news that Senator Jubril Martins-Kuye as been curiously providing leadership for a group that has been factionalizing our Party in Ogun State and the latest among their atrocities is that they have taken the Party to Court, which contravenes Article 21.1 (l) of the Peoples Democratic Party, which says: The Party shall have power to discipline any member who resorts to court action or litigation on any dispute or on any matter what so ever, concerning rights, obligations and duties of any member of the Party without first availing himself or herself remedies provided by the party under this constitution'.

But in a swift reaction, two chieftains of the PDP in the state, Alhaji Sule Onabiyi, the board Chairman of Nigerian Civil Aviation Authority (NCAA) and Chieftain of PDP in the state and Alhaji Wasiu Dawodu, threw their weight behind the nomination. In a statement jointly signed by the two, they described the two nominees as illustrious and qualified sons of Ogun State.

The statement stated that Senator Kuye is a Harvard trained gentleman with tested political pedigree and service in Ogun State and the nation adding that as a foundation member of PDP, he contested as governor with his political structure spread across the state. It said he had also served the nation meritoriously with unblemished record as a Senator and Minister of state for finance.

They claimed Awodele is an active member of PDP in Ward 7 in Abeokuta North LGA, contrary to allegation in certain quarters. According to them, he indeed, was one of the eggheads that formed Governor Gbenga Daniel's 'Transition Working Group'' that drew up the blueprint tagged ''Contact with the People'' used by the governor in his first four years in office.

'We therefore wonder at what point, these two illustrious sons and party men became unacceptable to some people in spite of their pedigree and service to Ogun State and Nigeria'', the statement said. The statement also wondered how the party and governor could nominate Professor Olukayode Oyesiku, a civil servant at Tai Solarin University of Education as a Ministerial nominee in the place of many competent and qualified loyal partymen.

The duo therefore called on Senators to clear the two nominees as Minister to work with the acting president in moving Nigeria forward.

A group from the Ogun West Senatorial District, ''Ogun West Mandate' which also rejected the nomination of the duo. The statement jointly signed by Mr. Dapo Oke and Bori Akinleye, President and Secretary said 'To say the least, it is heart bleeding that the two Ministerial nominees would emanate from Ogun State at this crucial time without any modicum of recognition and regards being accorded the Ogun West Senatorial District. 'For the avoidance of doubt, since the return of democratic dispensation eleven years ago, all federal appointments including ministerial, presidential advisers, ambassadorial, board appointments and other political offices to the centre have been the exclusive preserve of the Ogun Central and Ogun East People''.

Also, the leadership and members of the PDP in Ogun West Senatorial District of the state petitioned the Acting President, over the appointment which they described as lopsided. In the petition dated March 25, 2010, the group decried the political marginalization of the people of Ogun West at Federal level. The Ogun West letter which was signed by Senator Ayodeji Otegbola and Hon. Bisiriyu Popoola, both Chairman and Secretary, Elder Council Senatorial District, described as rude shock the nomination of Kuye and Awodele.

They said 'We wish to state that the nomination of Alhaji Jubril Martins Kuye from Ogun East Senatorial District for the second time in this Republic and Mr. Awodele Alao Najeem from Ogun Central Senatorial District is least expected, unconscionable, inequitable and grossly unfair to say the least'.