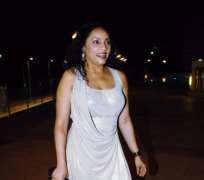 lilian bach is beautiful, but that is only stating the obvious. She has been able to worm her way into the hearts of many as a dazzling model, actress, singer and recently business entrepreneur, with interests in fashion designing, movie and a production studio. However, little or nothing has been heard from her in recent time and many have been wondering if all is well.

In her response to why she hasn't been prominent on the movie scene like she used to be some years back after her incursion into the make believe world in 1997, Lilian said: “I have not quit acting, I am still an actress. Though, you might have not been seeing my face as before, it is just because I have been concentrating on my new studio and other jobs, which are fetching me more money than acting. And because of that I have to give acting a big break but very soon, you will see me again on the screen.”

Continuing, this daughter of a Polish father and Nigerian mother, who sees flicks like Life Partner, True Romance, Eja Osan, Sister's Keeper, Armageddon Night, Angel of Destiny and Douglas my Love, as some of her best, maintained that for her, being an actress doesn't just end there.

“I have always been interested in what goes on in the technical side of movie production, behind the camera and the quality of movies that we have in Nigeria. Whenever I travel out of the country, people ask me questions like what is wrong with your movies? So I became very interested in the technical side, trying to know what was wrong with our production. I think all that motivated me into this area of production is to improve the standard,” she said of her exclusion from the screens in recent time and her starting up of a postproduction and editing suites – Roll Tape Production.

She stands tall as a beautiful and single star actress, who has stamped her feet in the Nigerian movie industry. And according to her, she would love to settle down but can't be pressurised to do so even though she is known to have been in a relationship with her lover of many years, Johnson Davidson.

“As you know, I am into a relationship and I am waiting for God's time. I thank God for a good family that I have because they respect my opinion just like I respect theirs. I won't be pressurised to get married but I know I would very soon,” Lilian said.

The young woman, whose beauty has always wowed many, is seen as one of the sexy vixens by many, while others see her as a sex symbol going by her enthralling beauty. However, the damsel, who has to her credit several modelling accomplishments which include Seven Up Bottling Company calendar, Rainbow Hair TV commercial and Delta Soap TV Commercial, doesn't see herself in that light, just as she maintained that she doesn't want to be seen or viewed as being sexy or a sex symbol.

“Beauty goes beyond the physical things, because if you are beautiful outwardly, and your inside is rotten, you are nothing. If you are humble, respectful, feel for others, you are kind-hearted, I think you are beautiful. Those are the things that make up the inner beauty,” she explained.

She further maintained that beautiful actresses and celebrities are not only admired by men, like it is widely said, but also by women, who are proud of them too.

When pressed on her musical career, which is yet to produce an album despite an appearance with a video many years back, Lilian, who claims to be Isale Eko, Lagos bred, said that she is not in a hurry or under any pressure to release her album, because she is not into it to make money but to win souls for God.

“I'm a singer and I have an album that I have cooked up since five years ago but I am yet to release it. I won't want to be seen as one of the actresses trying to sing or jumping on the bandwagon.”

“But I am a very patient person, I like to take my time on whatever I'm doing and I am not in a hurry or under any pressure, because I am not doing it to make money, but to win souls for God. People were just fortunate to see one or two tracks out of the six tracks then but I've got some more tracks in the album. It's gospel music because that's my calling and as time goes on, I will make up my mind on when to release it,” she said.

In 1997, she moved into the make believe-world, where she dazzled in several home videos and soap operas, which earned her an Afro Hollywood Award in London, kultural Ambassador merit award in Hamburg, Germany and The Nigerian Youth Organization Merit Award.