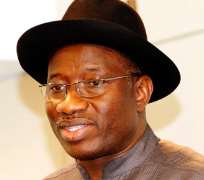 President Goodluck Jonathan was Monday evening locked in a meeting with governors elected on the platform of the Peoples Democratic Party as well as candidates of the PDP for the April 11th election.

The meeting, which started at about 5:30pm at the new banquet hall of the presidential Villa was still on going at the time of filing this report.

Although the agenda of the meeting was not made known, it may not be unconnected with the preparation for the election.

President Jonathan had earlier in the day met with all the candidates of the PDP from the state House of Assembly, governorship and national Assembly election.