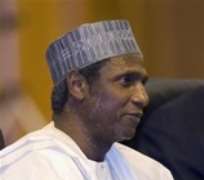 
Ailing President Umar Yar'Adua is undergoing spiritual rejuvenation, which will see him reinvigorated physically and mentally, says Abuja-based Pastor Olusegun Adebamigbe. Speaking exclusively with Saturday Sun, the pastor said that God has a purpose for Yar'Adua's illness and the unfolding political drama in the country. He believes that the country will emerge stronger at the end of the day.

'Nothing happens to a man, a people or a nation except God decrees it,' he argued. 'Before something happens, God knows about it. He knows the beginning and the end. He knows why things happen the way they happen. I want to believe that God knows the beginning and the end of Yar'Adua's illness and there must be a purpose for it. Because he is a man of peace, a good man at heart, God may be preserving His life for a purpose.'

Pastor Adebamigbe said some people get sick for less than a minute and die, while others die after being ill for 'one week; some after a brief illness, as they call it in this part of the world. But this is a long illness and he is still alive. I strongly believe that he is undergoing spiritual rejuvenation, which will see him renewed at the end of the day. I believe the man will bounce back stronger.'

Asked if that means Yar'Adua will be strong enough to resume at his desk soonest, the cleric replied: 'I am not a politician and I don't want to dabble into politics. But what I know is that the man must enjoy great favour from the Almighty to be still alive. God loves him and must have a great purpose for his life and the nation's life. If it's God's will, he will return to power, no man can stop it. For being alive when many had taken him for dead is a testimony to God's abundant love for him, his family and well-wishers as well as the nation. We shouldn't wish our leaders bad, despite their shortcomings. The holy books enjoin us to pray for our leaders in health and sickness.'

Yar'Adua has been away from office since November 23 last year due to debilitating illness described by doctors as pericarditis. And since then, he has remained incommunicado.

News reports said that the Chief Imam of the Abuja mosque, Ustaz Musa Mohammed and other Muslim clerics visited Yar'Adua on Thursday, and had discussion with him for over two hours.

Leader of the Izala Muslim sect in Katsina State, Sheik Isa Pantami and the president of the Supreme Council of Sharia in Nigeria (SCSN), Sheikh Ibrahim Datti Ahmed were part of the team and they reported that his health was showing signs of improvement, as he even joined them in prayers.

On Tuesday, Yar'Adua also reportedly met with his friend, Alhaji Dahiru Manga, a member of the House of Representatives, Hon. Inuwa Shehu Imam and Gov. Isa Yuguda of Bauchi, his son-in-law.

Lagos Carnival adopts Maltina as official drink
By ZIKA BOBBY
Maltina, product of the Nigeria Breweries has been named the official malt drink of the 2010 Lagos Carnival. As part of efforts to make the carnival an unforgettable experience, the Maltina brand has pledged to reward participants who excel at the event with prizes.

He disclosed that various points would be established by the Nigerian Breweries Plc where free Maltina drinks would be served participating teams and Lagosians at the carnival billed for the this Easter.

He assured that Maltina would continue to support socio-cultural aspects of lives of the Nigerian people 'by identifying with those qualities that distinguish us as a people.'

He however, pledged the brand's continued commitment to giving back to the society by way of corporate social responsibility in a sustainable way.

The Lagos State government is hosting the premier edition of the Lagos Carnival on Easter Monday. This is expected to be a family outing for residents of the state as well as a tourist event.

NSPRI warns against use of insecticides in food storage

From Desmond Mgboh, Kano
The Executive Director of the Nigerian Stored Product Research Institute, Princess Moji Adesida has warned against the use of chemical insecticides in the storage of eatable products, linking a number of health incidents in the recent times to the nature of food preservation applied on the food items.

She gave the warning during an interactive session with local traders at the Dawanu Grains Market in Kano, where she stated that the use of any chemical as a means of storage of food products is unhealthy to the lives of the end users and should, therefore, be stopped.

Incidentally, on arrival at the market, the members of the Governing Board of the Institute found a number of labourers applying Dichloroviayl Dimethyl Phosphate 1 to the heaps of grains in the market, preparatory for storage in warehouses.

According to her, since there are alternative means of storage that have been developed by the Institute today, the traders will do well if they resort to the use of such alternatives.

'You have alternatives. Therefore, avoid the chemicals even if it means applying the alternative after every three months. After every three months, you bring them out and apply the granite dust and repackage them. That is what this country wants now. The use of chemicals in your storage process is dangerous to your own health and the health of the final consumers of the grains', she said.

The Deputy Provost of the Federal College of Agricultural Produce Technology, Kano, Dr. S. O. Okunade also pointed out that mortality rate is high among some of the labourers who are engaged in the application of these chemicals, noting that the labourers are not exposed to precautionary safety measures.

He remarked that immediately after the application, some of the labourers use the same hands used in touching the chemicals to eat. He advised that apart from the use of gloves on both the hand and nose, they should take a few spoons of palm oil and a tin of milk after applying the chemicals.

The Secretary to the Dawanu Market Development Association, Alhaji Aminu Mohammed said they have been speaking with their members on the need to make sure treated beans were kept for an upward of six months in the stores, before they are released to the market for sale.

He tasked the visiting board members of the Institute to support their efforts by organizing seminars for the traders.

The regatta, which is in partnership with Castledown Arts Centre, Lekki, Lagos, a private enterprise is to give the event the international flavour it deserves and also deepen its tourism content.

Chief Chinedu Idezuna, Managing Director of the company, who confirmed the partnership, recently, said the regatta would hold tomorrow at the Lagos creeks, as the major component of the festival, while governor of Lagos State, Mr. Babatunde Fashola would flag off the competition.

'Over 50 communities have confirmed their participation in the event which is expected to showcase a rich float, swimming, and the drumming dexterity of the riverine communities. I think it's going to be highly competitive', Idezuna said.

He also said that mobilization and sensitization was still going on to attract a large following and that the partnership was to make the regatta very rich, colorful and highly rewarding. Although he did not announce the prizes to be won, he was emphatic on the price tag, which he described as irresistible. He however disclosed that entries have been received from communities living in Badagry, Epe, and Lagos Island.

He said the floats, to be decorated in the state colours and that of sponsors would start from the 5-Cowrie Creeks to Maroko jetty, Ozumba Mbadiwe foreshore, through the Marina and Lagos lagoon. A team of judges has been hired to be on duty that day to ensure that the activities are properly adjudged.