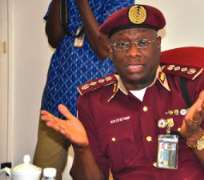 The Corps Marshall of the Federal Road Safety Commission, Mr. Boboye Oyeyemi, has said that the agency will no longer insist on any deadline for the enforcement of the new number plate.

Oyeyemi, who stated this on Wednesday in an interview with journalists when he paid a courtesy visit on Governor Theodore Orji at the Government House in Umuahia, said the agency would abide by the court ruling which restrained it from enforcing the proposal.

He explained that motorists who still had the old number plate would rather get the new ones when they go to renew their vehicle licences.

Oyeyemi said, 'We will abide by the court ruling. It was a case of double taxation to be compelled to have the new one if your licence has not expired. It is a phase approach. If your driving licence expires, you go and renew it. It is a 12-month cycle. There is no deadline again.

'That does not mean that if you carry a fake number plate or driving licence that you will not be prosecuted, ' he said.

The corps marshal, however, vowed that the agency would not back down on the June 1, 2015 deadline for the enforcement of the speed limit device.

He said that by 2016, all imported vehicles in Nigeria must have speed limit device installed in them.

The policy, according to him, has become necessary because of the discovery that over 15.8 per cent auto crashes in the country was speed related.

Oyeyemi, however, noted that Nigeria recorded 25 per cent reduction in road accidents in 2014 and lesser incidents in January 2015, expressing the hope that with the new device, auto crashes would reduce by 80 per cent in 2016.

He called on state governments to set up traffic management agencies to man state roads so that the FRSC could focus on interstate and federal roads for more effective results.

The FRSC boss had earlier during an audience with Orji offered to train Abia traffic officers at the agency's training school at Udi in Enugu State.

Responding, Orji appealed to the FRSC to assist the state to shore up its internally generated revenue through number plate registration and renewal of vehicle licence.

He frowned on the sharp practices of some syndicates who defraud the state of revenue through sale of fake number plates. He also advocated for the setting up of a joint task force to crack down on the perpetrators.

Orji said his administration had commenced expanding some internal roads in the state to accommodate more vehicles and lessen road accidents.

He thanked the FRSC personnel in the state for their efforts in reducing auto crashes, and pledged the continued support of his government for the agency. - Punch.