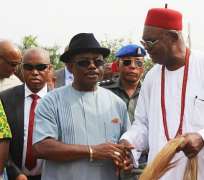 The governor of Anambra State, Chief Willie Obiano has commissioned an ultra-modern clinic and a corporate office for Donor Agencies, working in Anambra State.

Inaugurating the two facilities located in the premises of the Government House in Awka, Wednesday, Governor Obiano expressed satisfaction with the construction of the clinic and assured that the state would build more of such facilities to ensure a robust intervention in the healthcare sector.

He recalled that his administration had flagged off the re-modernization of Onitsha General Hospital which is the oldest hospital in the State, noting that when completed, it would be one of the best in the country capable of stemming the tide of medical tourism to Germany and India.

In addition to the provision of Flying Boats and Water Ambulance to serve the needs of the riverine areas, the governor promised to provide a Helicopter Landing Pad for Onitsha, and other areas, with Air Ambulance to give quick emergency medical attention in order to save lives.

He stated that Health being one of the Enablers of development, he was committed to laying a sound foundation in the health sector as his administration did in security, noting that his administration had supported Catholic and Anglican mission schools in addition to renovating 570 primary schools since the inception of the APGA government in the State.

Also speaking at the inauguration of the Donor Agencies Office, Governor Obiano expressed happiness with the interventions from what he called 'development partners,' stressing that the number of donor agencies has increased from 15 at the inception of his administration to 20 while contribution from the Donor Agencies have risen from N12 billion in 2014 to N15 billion in the 2015 budget.

Earlier, Commissioner for Economic Planning and Budget, Professor Solomon Chukwulobelu had expressed happiness with the commencement and completion of the Donor Agency Office, noting that it was a big relief that the governor deemed it fit to set up an operational arm to complement the activities of his Ministry.

The Senior Special Assistant to the Governor on Donor Agencies, Hon. Ernest Adinweruka, pointed out that since the inauguration of the Obiano administration, the State has witnessed a tremendous positive change and is marching to greater height especially in the areas of security, agriculture, economic development, housing and good governance.

Hon. Adinweruka commended the management of Sky Bank Plc for constructing the world-class building free of charge and Fidelity for equipping the Information Technology, assuring that the team would achieve and try to surpass its target in 2015 budget.

Also speaking, the MD Sky Bank, Mr. Timothy Oguntayo stated that the Bank donated the building to function as a befitting office to the Donor Agencies in the State as part of its effort to identify with the government, adding that the existence of the office would provide the conducive environment that would position them as a serious entity to carry out its function and attract meaningful benefactors to donate to the State's noble goals.

Mr. Oguntayo advised that, given the dwindling revenue at the centre occasioned by the state of the global oil market, the Bank was prepared to partner with the State government and assist it to tremendously improve its internally-generated revenue as an alternative using its robust IGR software/package as a lead bank in the IGR business.