Obasanjo, a shame to the military —DHQ 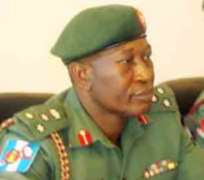 The Defence Headquarters has described former President Olusegun Obasanjo as an embarrassment to the military institution.

The Defence Headquarters made the comment in a statement posted on its Facebook page while reacting to a statement credited to the former President that the General Elections were postponed to enable the President to use the Service Chiefs for tenure extension in an electronic mail on Monday.

It was said that while Obasanjo's intentions remained unclear, his motives for making such utterances were less than noble.

The statement stressed that Obasanjo's claims were false.

It was also said that it was rather surprising that Obasanjo opted to ignore the assurances by the Defence authorities in a statement that the military would continue to be apolitical.

The military said that while it had the desire to accord some respect to Obasanjo and his views, the statement credited to him did not reflect the standard of discipline expected from a former General of his status.

The Defence authorities said that the world had moved beyond the mentality of Obasanjo, insisting that the military personnel of today were better equipped in the area of training, education and exposure to have a better appreciation of democracy and its importance to national prosperity.

'The Defence Headquarters has noted the remarks of a former President,   Chief Olusegun Obasanjo, as reported in the media stating his views on perceived state of the armed forces and   the roles being allegedly played by the military in the nation's political process in recent times…

'It is however noteworthy that most of his utterances lately indicate an attitude of playing to the gallery or indulging in politicisation of serious national security or military affairs. For instance, the comments credited to Chief Obasanjo alleging that the postponement of the General Elections was to enable President Jonathan to use the Service Chiefs to plot a tenure extension is to say the least, very surprising.

'It is surprising indeed, considering the fact that the retired General chose to ignore the clarification and emphatic assurances of non-partisanship of the military as declared in a DHQ statement on the position of the Armed Forces in the ongoing political activities. His motive as usual remains unknown but it is certainly less than noble or well intentioned. We dare say again that Chief Obasanjo's assertions are false.

'Much as the military desires to respect the old General and his views, it has become necessary to point out that his conduct and unguarded utterances of late have fallen short of the standard of discipline expected of an individual who has had the privilege of service in the military and risen to the status of a General.

'The behaviour of retired General (Chief) Obasanjo has been so unbecoming and continues to constitute a serious embarrassment to the military before all who have reasonably and rightly adjudged the essence of military background in terms of the high value and standard it tends to contribute to statesmanship.

'We feel constrained to remind the old General that the world has moved beyond that parochial and self-adulating reasoning and mindset which he seems stuck to. Indeed, he needs to be told that by virtue of their better training, exposure, education, assessment and environment, the military personnel of today are already far beyond his level in their appreciation of democracy and its indispensability for the stable and prosperous society which Nigerians cherish,' the statement read in part.

It was further said that the military institution bequeathed to the country had developed beyond where he left it and was more committed to the maintenance of the ethos of service of the military, valour, subordination to civil authorities and adherence to non-partisan discharge of their responsibilities.

The DHQ stressed that the military was not inept and could not have been misused in the manner presented by the former President.

The statement added that the military had such a strong belief in democracy and its structures and institutions that it would not do anything to undermine it.

It challenged Obasanjo to indicate genuine interest in the growth and sustenance of the nation's democracy.

The statement urged Obasanjo to improve his understanding of complex issues involving the military and to encourage the services rather than imputing ulterior motives to security efforts.

'The Defence Headquarters will like to encourage Chief Obasanjo to be genuinely interested in the growth and sustenance of Nigeria's democratic credentials. He is also enjoined to endeavour to improve in his understanding of intricate issues and try to encourage the military rather than continue with this tendency to indulge in imputation of ulterior motives to every effort, all for the purpose of discrediting well-thought-out policies or decisions related to the military's roles in the polity.

'The support of all well-meaning elderly Nigerians remains vital in the onerous duty of working for the stability, defence and peace of our country under duly constituted authorities in a democratic environment,' the statement added.