Vote For your Favourite Model for Glam Africa Fashion Night 2015 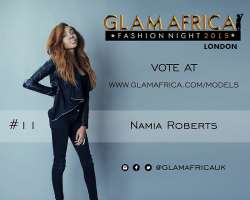 Glam Africa is inviting members of the public to participate in an Online Fan Vote to pick the final 10 out of the shortlisted 22 models to participate at Glam Africa Fashion Night 2015 (GAFN) holding at Porchester Hall, Bayswater London on Sunday, 22nd, February.

Members of the public will be able to vote online at www./glamafrica.com/models starting on Monday, 26th, January, 2015 at noon through to midnight on Tuesday, 3rd, February when voting ends. The voting results for the Final 10 will be announced on Wednesday, 4th, February, 2015.

To vote, log on to www.glamafrica.com/models, tick your favourite model, enter your registration details and submit. A full list of participating designers will also be announced later this week.