2015: Fayose, A Governor Without Honour 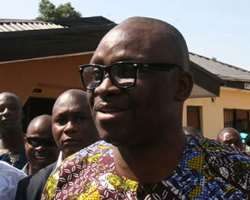 No fewer that 895 shares, 2,956 retweets, over 1,500 reactions trailed the much criticized publication credited to the people of Ekiti January 18, 2014 on all social network accounts. I am aware the advertisement was authored and signed by Peter Ayodele Fayose, the erstwhile controversial Governor caught passing under barbed-wire at Muritala International Airport. The advertorial is still trending abuses, hurling insults on the people of Ekiti state who voted an animal as Governor. One of the many tweets and reactions that encouraged this piece was that of Obasanjo, Omojuwa and Nasir El-Rufai. The trio are frontline public figures who had never negotiated their feeling on any issue bothering Nigeria populace.

The tweets and reactions though personal opinion dished a hot slap amidst humpty pomp on the integrity of Ekiti. Yes, like the gambol adage “omosan lo lu popo mo Iya e” I found that offensive like every Ekiti person though half birthed. I also knew well enough like Fayose want us to be believe the advertorial was his thought though provoking not Ekiti breathed opinion but his, Ayodele Fayose, Governor of Ekiti. I was able to dissociate Ekiti State with over 3million populated people from the Governor representing the interest of his party and self opinion.

In politics such interest is not contractile of just party ideologies. This,Governor Fayose may not know.

Ayodele Fayose can fly his view, opinion and vote. Infact, that of his wife, children if they are eligible and all sworn allies. In fair view, that is the least reason any sane minded person that know Fayose's record should take him serious.

Am aware many may not remember that, Fayose was the Governor between 2003 -2006. Don't ask me why he didn't spend the usual 4years. Anyone with incorrigible track record of death in UK coming back home with bearing tale of another name isn't worth ruling a knowledge flowing state like Ekiti. This Femi Falana, Babafemi Ojudu, the Osuntokun's, Wole Olanipekun, Babalola Borisade, Tunde Adeniran and Dare Babarinsa, Chief Afe Babalola obviated immediately the reality of the scammer turned Governor dawned on them. The struggle was inevitably fought for collective reason and upholding the common value, honor and interest of an average Ekiti indegene.

With the various publications and widespread reports of his assailed crimes which revolves round maiming, assaulting, theft, corruption, judicial rape, notably was killing of Ayo Daramola, a former World Bank Consultant and executive clamp-down on opposition in the state paved way for his historical exit from the state through the thick dark disguise. At that, there was high level of criminal cases instituted against the supposed peoples Governor. EFCC and ICPC later trial was a pointer to the constitutional exchanges between Ayo Fayose and the House of Assembly which unintermitently stained his executive immunity.

Believe me, Peter Ayodele Fayose is a house-hold name for controversy and trivial issues. For every controversial statement credited to him he has his sneaky way of sequestering the trouble on the Presidency. So, I am geniuely amused if anyone who knows him is surprised at his action

Of course, toddlers and younger political analyst might be naïve of Fayose's uncultured activism in Ekiti. What do you call a Governor with all the exalted paraphernalia of office chasing traditional rulers openly with sole aim of embarrassing the revered Oba. His offence, he had openly criticised “Oshokomole” the name his goons and traducers call him.

What do you call a man that fought all institution of government including students, and drivers unions to coma leaving only an unfairly taste of recourse after his exit? When I saw people's concern and huge effort to discredit Fayose on issue like this I get offended and bothered. Gov Fayose has only displayed his immoral extremism for trivial sentiment in defending his Principal.

The many reasons Fayose and his agents of destruction shouldn't be taken serious are; in his gaffes and lies. Taking a breather example of such was during his official thanksgiving in Ado Ekiti, a picture of him prostrating before God and spiritual fathers on alter is a far unapt to the “New Man”, “Change Man” assurances and promises given to his bad mediocres.

Someone that lied on God, lied on his children shouldn't white-wash our refine mentality as a right thinking democrat. All he has consistently done is wear torn garment of honour with pride.

Gov Fayose must have taken an overdose of his acerbic drug. This was in reflection in the widely justifying statement released after the advertorial gaffe. He said “It is in defence of fairness that I called attention to the potential crisis we may face God forbid that the health of the general becomes a hindrance” What a big ruse and accelerated farce! Wait, will it be fair to say Gov Fayose doesn't read more than Tribune Newspaper who lack peoples merit in choice of high-flying means of reaching the people? Someone should remind Fayose that the Plasma HD Television at Oke Ayoba and Govenors office is not for decoration. Outrightly, Fayose's Buhari death wish though condemnable and ridiculous of a person with blemish character and spurious personality inciting the people against the people mandate on the frivolous excuse of death can only mean one good thing, Fayose and Jonathan couldn't stand by the reality of Buhari's rising fame and acceptance.

President Jonathan's Chief Thug should have confided so much in AIT if not Channels in feeding him the truth about the peoples General whereabout. As at that cacophonous assumption that The APC Presidential candidate is jetting out for health issue, he was in Abuja with his predecessor Dr Kayode Fayemi preparing for Niger and Kaduna rally. That doesn't go for anything than an outright condemnation and distasteful embarrassment to the exalted office of Governor. It would have been out of context for those criticizing him if he had restrict the wondrous slander to his name only in line with the dispirited dossier of a Governor without an honor.

Consequently upon this, it reminded Nigerians once again that for Ekiti people is a Governor that was not meant to be. Governor Fayose doesn't represent the interest of the Ekiti people.

There are lots of issues that need his executive attention as political leader rather than rubbing shoulder with his old political fathers. It is obvious Buhari wasn't the main target really. Fayose is still miffed that he is barred from pushing his hatred and resentment for Obasanjo further than Newspaper attacks especially when it is becoming glaring the former President is ready to dump his boss, Jonathan.

One of the many issues is the non-payment of salaries, his running battles with the legislative arm of government and not to forget his judicial recklessness hanging on his neck. He is the first Governor in the history of Nigeria to have beaten up a judge and also threaten another judge for handling a case. And there is also the constitutional breach of passing 2015 budget with just 7 lawmakers in attendance, Illegal impeachment of authentic speaker and scare threat issued to the progressive honourables have not been settled. High level security breach in the state where armed robbers robbed broad day light, car snatches with heavy armoury and assault on opposition should have been the major concern of a serious Governor.

Until all these are addressed, Gov Fayose statement(s) and contribution(s) to national issues should be treated as a mere utterance of a drunk and unserious public servant.

This is the time, not later. We should just get serious with our campaign and strategy because Fayose has lost his garment of honor and shouldn't be taken serious