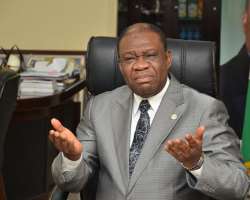 The Federal Government has approved the provision of one million meters for distribution to electricity consumers in the country.

The Ministry of Power, which made the announcement in Abuja yesterday, also set a new electricity generation target of 6,000 megawatts before the end of this year. And this is as government announced that generation has moved from 3,000mw recorded last month to 4,300.

The Minister of Power, Prof. Chinedu Nebo, who disclosed the new details at a town hall meeting on the power sector held in Abuja, said: 'The peak for yesterday (Wednesday) was 4,405mw with a spinning reserve of 70mw. So, you can see that we are getting there. At 6:00 a.m. today (yesterday), it was over 4,300mw with spinning reserves. So, we have really gone a long way.'

Besides, the minister said the Transmission Company of Nigeria (TCN) had an increased capacity to evacuate 5,500mw, stressing that government was in partnership with an international agency to provide sensors on pipelines in order to detect spots and time of vandalism instantly.

His words: 'The President is working hard to banish the vandals of our oil and gas and transmission infrastructure. And he is working on getting an international agency to digitise the entire pipeline so that there will be sensors planted so that whenever people approach them, it will be easy to detect where people are going. It will be easier to repulse them but if they insist.

He, therefore, called for a legislation to prosecute vandals of power and gas installations, noting: 'We need to get to the root of the matter. Those who have been arrested have not been able to tell us those who are sponsoring them.'